Home » Food » My Favourite Way to Spend a Saturday

One of my most favourite places to spend a Saturday is in my kitchen, cooking up a feast for guests!  I love the whole entertaining process: from shopping for ingredients, to setting the table,  to preparing the food, and of course, to serving it along with good wine.  It’s even better because hubby gets involved in parts of the process and we make a good team – he helps with the setup, usually does the wine shopping, keeps guests entertained while I’m finishing my plating,  and always does the dishes (not a small task, my friends, not a small task at all!)

So, we’ve invited some friends over – sometimes totally last minute, sometimes months in advance.  Now, I have to decide what the heck I’m going to make.  If my guests are “regulars”,  I know what they like and don’t like; if they are “new”, I ensure to find out ahead of time if there is anything they don’t like or can’t eat (because I do not like it when my food is not enjoyed)!  More importantly, there no way anyone is leaving my house after one of my meals, needing to stop off at McDonald’s on their way home ‘coz they’re hungry!

My kitchen TV is tuned to Food Network Canada (pretty much always) for inspiration and just because I love watching cooking shows like Chopped or Iron Chef America (and I frankly don’t care if it’s a repeat or not, I’ll re-watch it – as was the case this Saturday –  Robert Irvine and Cat Cora were competing against Michael Symon and Anne Burrell, who won) while I chop, dice, sautée…. 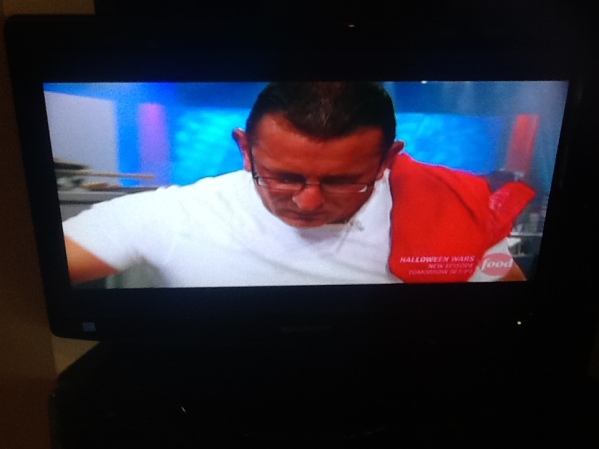 There was a nice special on Frenched pork roast at one of our local grocery stores so that was the protein de choix for the evening.  Hubby suggested the menu should be comfort food as our guests were going through a rough time with a sick parent.  André loves my carrot-bacon soup so, though I don’t like to repeat, I did make that.  Tammy is a potato-holic so for sure garlic mashed potatoes were also on the menu.  Hmmm… what veg to go with?  I had some nice purple carrots so, tossed them à la Jamie Oliver with rosemary, garlic, olive oil, wine vinegar and salt & pepper and onto the heat they went to be roasted. 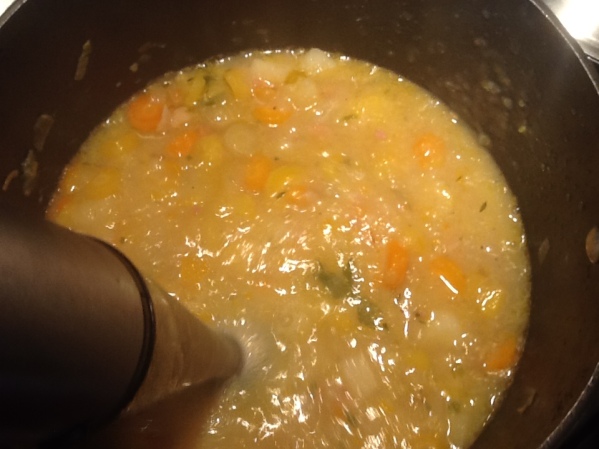 I cannot believe I forgot to take a picture of my beautiful roast. Dang!  I had a fabulous rosemary, pepper, fennel seed crust on it. 😦  Guess I’ll just have to remake it and take a picture for a future post!  I shouldn’t feel too bad, it does mean I was busy spending more time with my guests than with my camera….

I do enjoy making fancy desserts, but in this case, Mick asked for an apple crisp.  Who was I to say no?  And who doesn’t like cinnamony bubbling apples, covered in a nice oatmeal streusel, with a scoop of ice cream on top? Who? 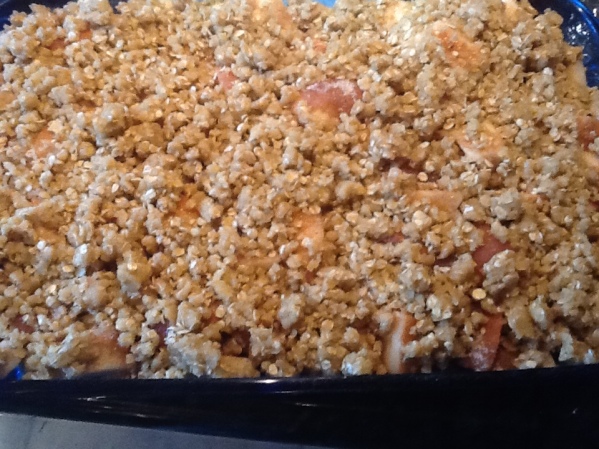 The neighbour passed by with a case of beer, and when he found out we were having company over, tried to leave.  We told him it was way early yet, the guests wouldn’t arrive until 5:30-6:00 so really, no rush!  When the did show up, we told him to go get his wife and at least come back a glass of champagne!

While we were sipping said bubbles, I rearranged the table settings to add three people (their son was also invited, of course!)  They did try to protest but, with our irresistable charm, and the assurance of Tammy and André that they were more than welcome to crash, they relented and stayed – though Robert did insist on bringing some of his fabulous roasted peppers!

A good time was had by all and no one left with an empty belly!

The next day, looking in the recycling box, I understood why my head ached a bit…seemed like there were far too many empty bottles of wine in there!

8 thoughts on “My Favourite Way to Spend a Saturday”