Home » Uncategorized » A Mish-Mash of Stuff

Since we got back from Florida, I’ve been like a chicken with her head cut off, or maybe, more realistically, like a zombie, the Walking Dead slow kind, not the Zombieland fast kind! Turning around in circles, wandering from one room to another, looking for the next thing to chew on. Maybe I just had way too many things on my to-do list that overwhelm overtook me. Maybe I couldn’t focus on prioritizing. Maybe I wasn’t over that three-day drive home! Whatever it was, I think it’s over…

I have ideas for posts coming outta my wazoo and yet not a word has been typed thus far. Let’s write a post on resolutions (or as I prefer to call them, promises to myself) right after I do the three hundred and fifty-two loads of laundry. (Seriousy, that’s what it felt like.) Oh. Now we’re past the half-way mark in January – does it really matter?

1. I will treat myself with more respect.
2. I will love my body for all it is capable of doing for me.
3. I will stop procrastinating and start getting shit done.
4. I will not allow “bright, shiny objects to distract me from my goal – this can be anything from a new course (hello, finish the first one), to signing up to read more blogs, new exercise regimes, etc. 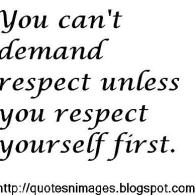 That will be all for now. Too many and overwhelm will overtake me again.

OK, so not so much a great idea as a little post on the “Corpses of Christmas” (or something like that – I do remember having come up with a great expression but since I did not write my post tout de suite, well, it’s gone).  I took a walk with Zeke (good intentions started upon the Monday following my return from the Sunshine State).  Along the way I notice one or two bodies on the curb.  There were a few hangers-on and I even spied a tree or two still up in people’s homes!  No, I was not being a Peeping Tomassina, they were right there in the window (and there was no way I was going to take a picture)! 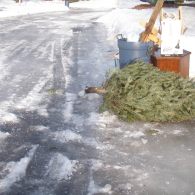 This post was also to include the dangers of such a walk after all the rain-snow-rain-cold-warm-cold… we had had.  I learnt the hard way that it was muy importante to walk on the “snowy parts” of the street/path!  And to not be fooled by the shiny, solid-looking snow in Teletubbie Park!

Next thing you know the day (days, week, weeks) is (are) done and the post is no longer really relevant. But I added them into this mish-mash anyway.

Fast-forward 14 days, give or take, and here I am… Well, jeez, how did that happen? Friday already? Did I accomplish anything at all? Lemme see…house is finally clean, laundry is caught up to date, went to karate Monday and Wednesday and Be-Fit (a friendlier version of Cross-Fit) on Tuesday and Thursday – on which date I hurt my heel, so no karate today. Perfect time to finally write a post.

Oh, not really, the IT guy is coming and will need my participation as I make the switch from Apple to PC. Yes, ladies and gentlemen, I made the move “backwards”. My iMac was ridiculously out of date (7 years old and no longer upgradable) and a new one was just too many buckeroos for me. Hubby and IT guy swear by Windows 8 and assure me that once I start using it, I will fall in love with it. Remains to be seen… I’m still in shock that I’ve actually said sayonara to my Mac!

So here I am Tuesday and finally am on it.  Heel still not functional to do either karate or Be-Fit – can’t even do the “Footloose Dance”. (Why, you ask, would I even be trying to do the “Footloose Dance”?  Simple really, I had PVR’d it the other day and actually watched it – the original Kevin Bacon version, of course – on Friday, even managing to get my boys to watch a smidge of it.  Eldest was in hysterics as I had explained to him, very seriously of course, that EVERYONE does the “Footloose Dance” when the song comes on – and showed him how.  He smirked at me and off he went to his Cadet over-nighter that started with a dance.  He came home the next day and said:  “Mom, you will NOT believe what song came on at the dance.  And EVERYONE started dancing the “Footloose Dance” !!!)

Slight aside, aside…. I decided to go walking today.  It’s about the only thing I can do and not for an overly long time (dammit).  So I ask Zeke, “Wanna go for a walk?” which makes him go into berserk mode.  Told my sister that I was off (she just called me) and she asked me if I was nuts.  What?  Why?  It’s effing cold out there! she yelps.  Really?  So I look on the weather app and well, dammit. It’s -21C with a windchill of -30C! Have I lost my mind?  Well, too late now, Zeke is pumped…  So I put on my big-girl pants (read snow pants) and off we went.  We were actually gone for a good hour!  We Canadians are a tough bunch, eh?

In my other life, I was a beaver

Lines in the snow

What? Does it show? 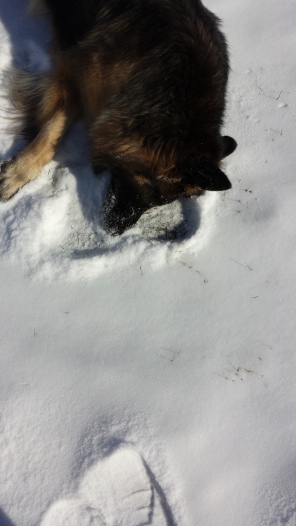 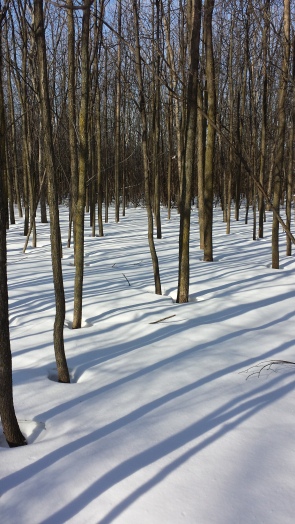 The sun was shining, the air was crisp, the snow crunched beneath my feet, I was dressed warmly.  What’s not to like?

Hopefully next time, I won’t be so all over the place!

6 thoughts on “A Mish-Mash of Stuff”