Home » fun stuff » Where Does My River Go, Conclusión

It was a gorgeous, sunny Sunday.  The boy asked the girl if he could join her and her dog for one of their adventures. How could she refuse!  They had no plans per se and they were just enjoying the day; going with the flow.  Who knew where that would lead?

As usual, Zeke patiently waited for them to get ready.  “Seriously, what takes my humans so long to get ready?” he wondered… 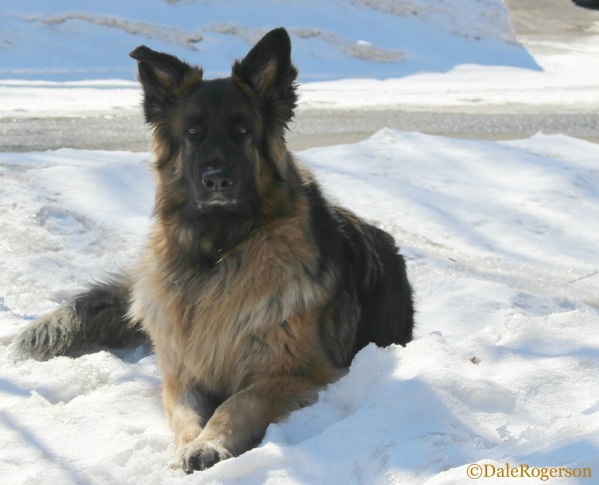 The trio decided to take a route they had never taken and headed for the other side of the tracks to discover new areas.  As they went on, they chose to cross the highway at one of the overpasses and walk along the river.  There are beautiful pathways which they hoped would be plowed.  While crossing, they noted the strip mall where the river ended and crossed under the highway.  Maybe they would find out once and for all just where this little river joined the St. Lawrence. 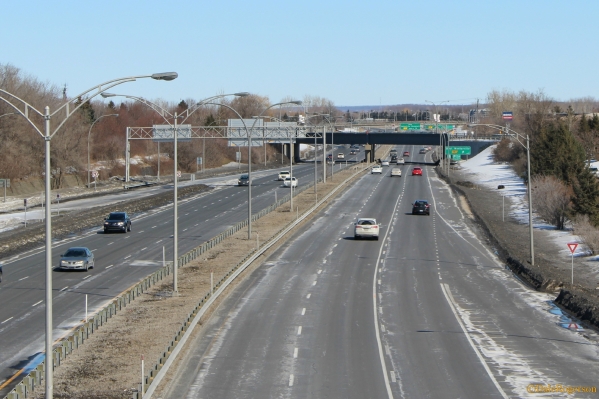 Along the way, they noticed some damage had occurred to trees during this past harsh winter and they found a house almost hidden from view. 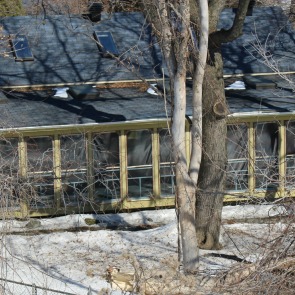 They continued on their way and found themselves at the Rowing Club building, so they went down towards the back which brought them directly to the river’s edge.  Funny how one can drive past a building many times but never really look at it. 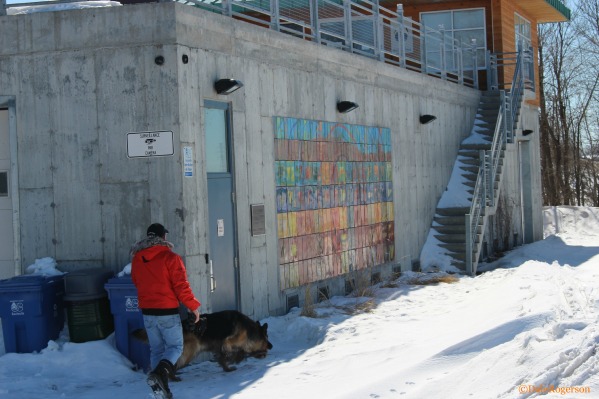 At this point, the girl, the boy and the dog just stood on the frozen river and looked around.  “Hey, you feel like crossing over to “Les Iles de Boucherville?” the boy asked.  Oh!  The mere thought of crossing the frozen river by foot was an adventure in itself!  They looked around and saw that there were many fishermen scattered about and didn’t seem worried one bit about falling through the ice.  “Why not?” the girl responded, and off they went! 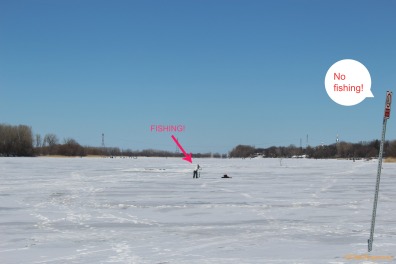 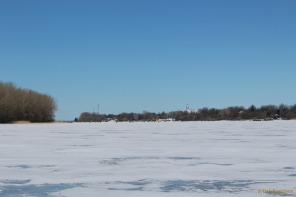 Towards the Boucherville Islands 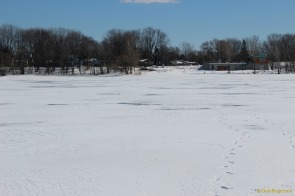 Once they got to the other side, Zeke looked back as if to scold them for being so slow!  He then ran up and waited for them to join him. 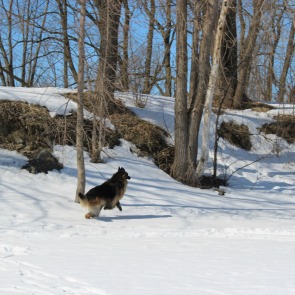 Approaching the other side 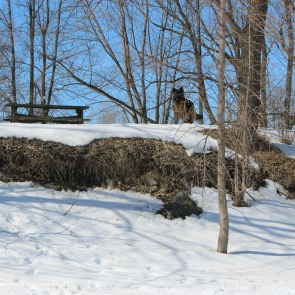 King of the hill

They walked along hoping to see deer as there are many to be found on these islands (a National Park) but, being a Sunday, there were quite a few people walking, jogging, snow-shoeing, cross-country skiing…  The deer made themselves scarce!

As they made their way back, the boy pointed across to what seemed to be an opening.  “There!  Look!  I bet you that’s where your river comes out!  Let’s go explore!” 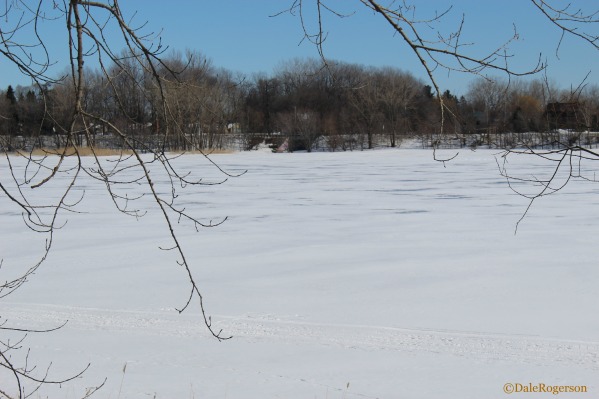 “Yes!” the girl exclaimed.  “Let’s!”  And off they went, enjoying the views… which included a water plane! 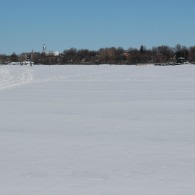 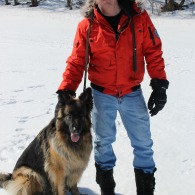 The Boy & the Dog 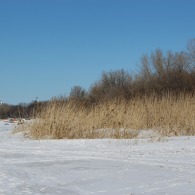 A plane, a plane!

They finally made it.  Indeed, it was definitely an opening, a viaduct, and had to be where the girl’s river joined the St. Lawrence.

The couple went under but Zeke was not following.  “Come on, Zeke!  It’s safe! You can do it!” they cajoled… He’d step forward, back up, whine and start again.

Finally, he realised they were not coming back for him and would leave him behind.  No way was he walking in the middle (though the river had a really thick covering of ice) so to the sides he went, slipping and sliding… 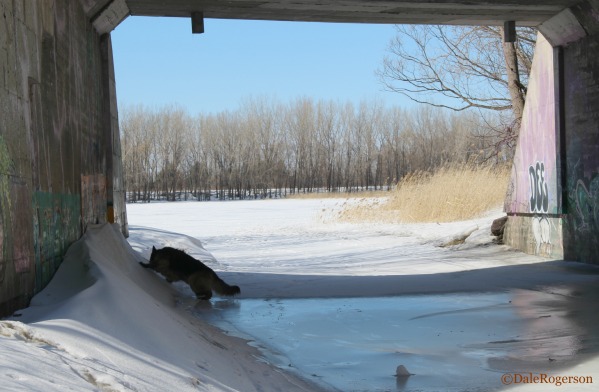 The couple continued walking pretty much in the centre of the river but not him!  He even tried to convince them to go up the sides of the riverbank to one of the heritage houses! 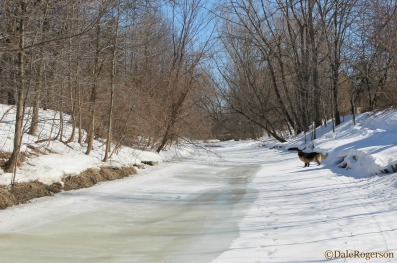 Towards to starting point 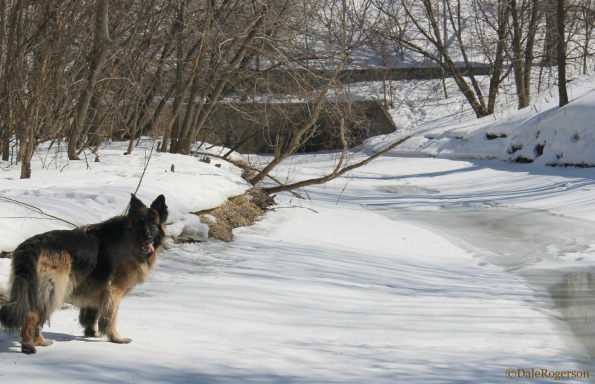 They continued walking and then.  What?…. a wall! What? 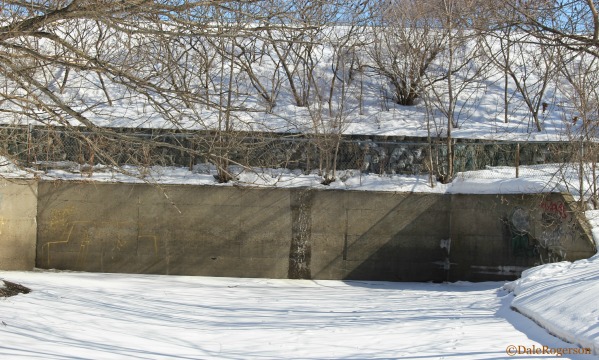 This couldn’t be it?  They walked right up to the wall and could hear the water running beneath their feet.  The boy stomped his foot to break the ice but could not break through… 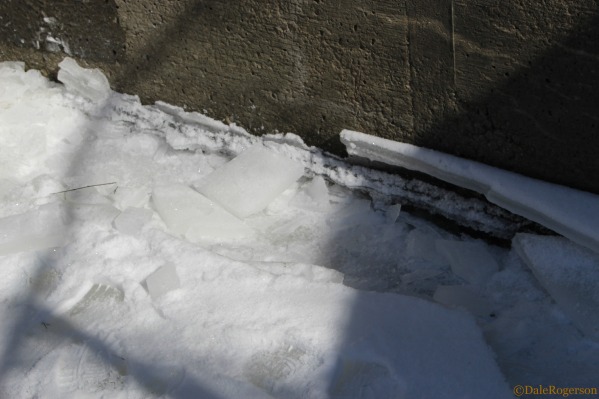 Trying to see the river

They knew this had to be where the river passed under the highway as there were no other options that they could see.  The girl climbed up the side to see and saw… 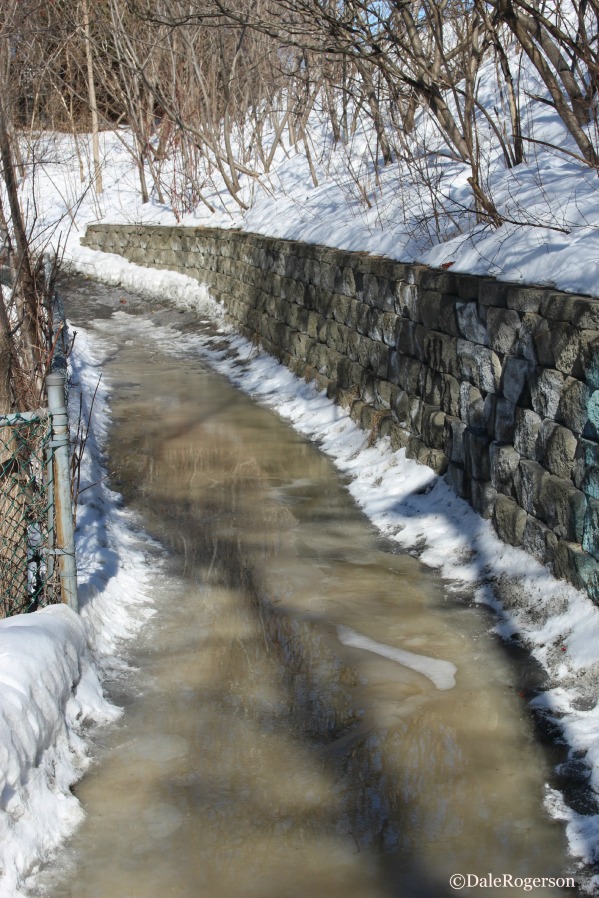 …this little walkway.  Hmmm.. it was impossible to follow along to the left as there were fences everywhere and they really did not want to risk slipping on the ice hiding beneath the water.   On the right side was a cul de sac and a passageway for the locals to use to get to the bus stop. 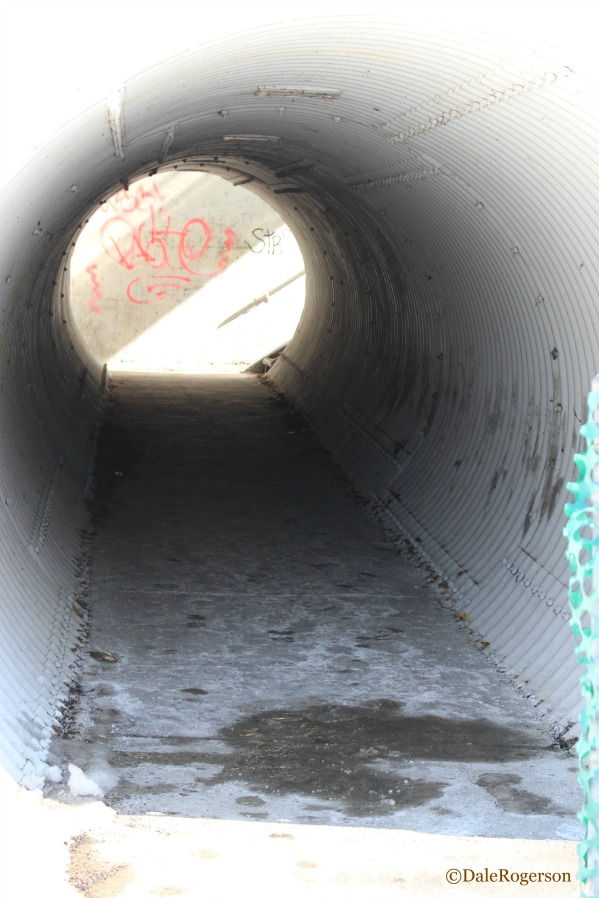 It was almost spooky to walk through!

The tunnel led to a staircase to said bus stop at the top of the overpass which crossed the highway. 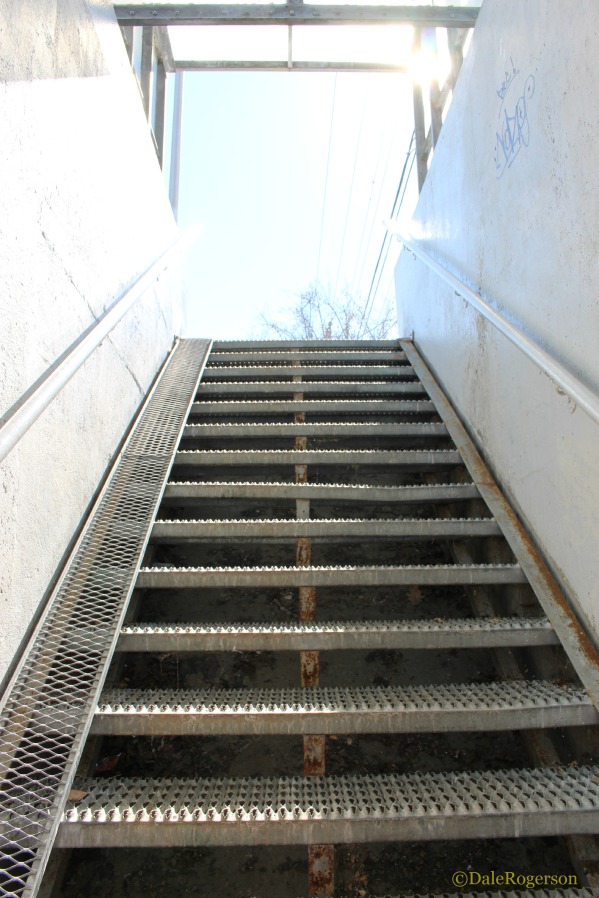 Up to the outside

“Well”, said the boy, “looks like it’s the end of the line!”  The girl nodded her head and said,  “I never would have thought that my river that started at the Parc des Brouages would end up here!  What a fun experiment, don’t you think?”

He nodded his head, grabbed her hand and they made their way home.  A perfect day indeed.

11 thoughts on “Where Does My River Go, Conclusión”