Hey there my readers.  I know I’ve been silent for a good while.  December started well with all sorts of great food contracts and fun stuff.  I so wanted to post lovely images of all my baking and Christmas Basket Making and maybe a picture of a walk or two with Zeke but frankly, when I had the time, I chose to sit on my duff!

Then, on December 11th, my world came crashing down with one phone call from Armen (Mick’s friend and partner):  “Mick is in the hospital after collapsing at Gino’s.”  What???   Nothing more could be reported as his status was unknown.  Sorry, Zeke, no walk for you.

You see, Mick could be “accident prone” at times so for the first few seconds I was not too worried.  Then the words sank in and I turned in circles a few times trying to get my bearings.  Collapsing does not imply accident. Then came a horrid feeling in the depth of my heart and in my gut.

Being a take-charge-kind of woman, I shook myself off, entered the coordinates of the hospital he was taken to (as I had absolutely no clue where this one was) and off I went.  A mere 9 km away and thankfully, no traffic.  Parked my car and ran to Emerg to find Tony, an employee of Gino’s, pacing back and forth, waiting desperately for my arrival.  “Oh quick, quick, they need information on Mick that I don’t know,” he urged as he steered me to the wicket (Information? Registration? I couldn’t tell you.)  Gave them Mick’s stats and asked what had happened.  He had had a heart attack.

A heart attack?  No. THREE heart attacks! One at Gino’s, one in the ambulance and the third one at the hospital itself.  The last one was the worse as they worked on him for 45 minutes to get a rhythm.  They were just about to call it and all of a sudden his heart started again.  A glimmer of hope.  They realised there was serious blockage happening and were not equipped to do anything about it so they had to send him via ambulance to another hospital one to have angioplasty and insert two stents.  This was done and within an hour or so, he was unblocked.  The doctor told us it went well but that he had a huge mountain to climb.  Since there was no room at this hospital’s ICU – yeah, we have just great medical here in Canada – he was ambulanced back to the first hospital.

The prognosis was very grim.  The chances of his brain being too badly damaged were great.

Mick was adamant that there was no way in hell he EVER wanted to be plugged to machines for the rest of his life.  He repeated and repeated:  “You don’t let them plug me in.  You kill me.”  Well, I love you and all that, dearest husband but not enough to go to jail… 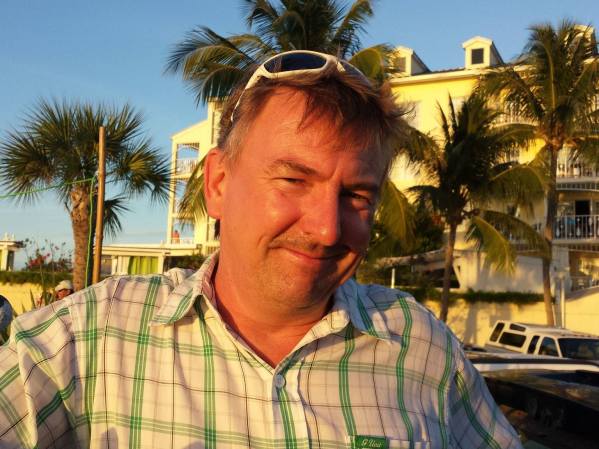 That said, seeing him on a ventilator was most difficult.  For ten days we talked to him, stroked him, kissed him and I promised him this was only temporary until he was back on his feet.  Or until other choices had to be made.  He never regained consciousness.

December 18th came along.  Mick’s 51st birthday.  Not at all the party we had intended.  There was some movement, the pupils were reacting a bit but he just would not come out of his coma.

The next two days he regressed.  The doctor started talking organ donation.

(To tell the truth, the first doctor he had was talking various possibilities/outcomes and that was one of them!  He did not sugar-coat a thing.  Not even to the boys and we appreciated it because we are optimists but realists at the same time.  We did take to calling him Dr. Ray-of-Sunshine, however.)

On the morning of the 21st, after discussing with the doctor, we agreed with the decision to let him go.  With his best friends and family surrounding him, he took his final breath at 5:15 PM.

My vigorous, enthusiastic, ball-of-positive-energy, loving husband’s light was snuffed out.

Everybody’s favourite guy/uncle/brother/friend/insert title here was gone.  How could such a thing happen?  We were (are) stunned and disbelieving.

During those ten days of waiting/hoping/despairing, I would post a picture of Mick along with the poem of the day.  Where did this thing come from?  I have always admired people who can recite poetry at a whim for any occasion.  I’m not one of them.  Google turned out to be a wonderful aid in this!  Search term:  Hope.  A whole listing of poems popped up.  Found the one that spoke to me and good ole copy and paste was put to work.  I did this every morning.  Faith. Strength. Love. Miracles.  Whatever word or feeling I needed, I Googled it.

It helped.   It also did something I never expected.  It sent me love, prayers and, good wishes, from all over the world.  People can diss Facebook all they want.  Not I.  I was given the chance to see the good side first hand.

I did consider writing a post to let all of you who are not on Facebook know what was going on, but I just couldn’t.  I needed a “quick fix” and Facebook was the way to go.  Post, leave for the hospital and sit with my beloved.  Come back, eat, sleep, repeat.

Well, yesterday we held the final good-bye.  I knew there would be lots of people despite it being in the middle of Christmas and New Year’s.  I knew there would have been even more had it not been.  Tonight we guesstimated that a good 300-425 people passed through the doors over the course of eight hours!  I was blown away. Too bad so many don’t sign the book, though.  Sigh.

We had held my father’s Celebration of Life at this same place less than two years ago and just felt it would be the best place for Mick’s.  The staff are all thanatologists and are the most compassionate group I have ever met (And I don’t really want to meet any more, thank you very much.)  This place is right on Mount Royal with views of the city and, in the summer, lovely gardens.  Who would think that this would matter?  But it does.  I cannot explain why.  It just does.

As you know by now if you’ve read a post or two of mine, there is humour in my life.  There was always humour with Mick around.  Lots of love but lots of laughs too.

Well, mixed in with the tears were stories of Mick.  From his childhood.  From his high school days.  From the past almost 20 years we spent together.  I have decided that these will be written down in a book of short stories.  Once I get my thoughts organised it will happen.

I am quite sure you will at least smile at this.  This is where Mick now resides until we send him to “swim with the fishes”!  Yes. Inside the Coke bottle… 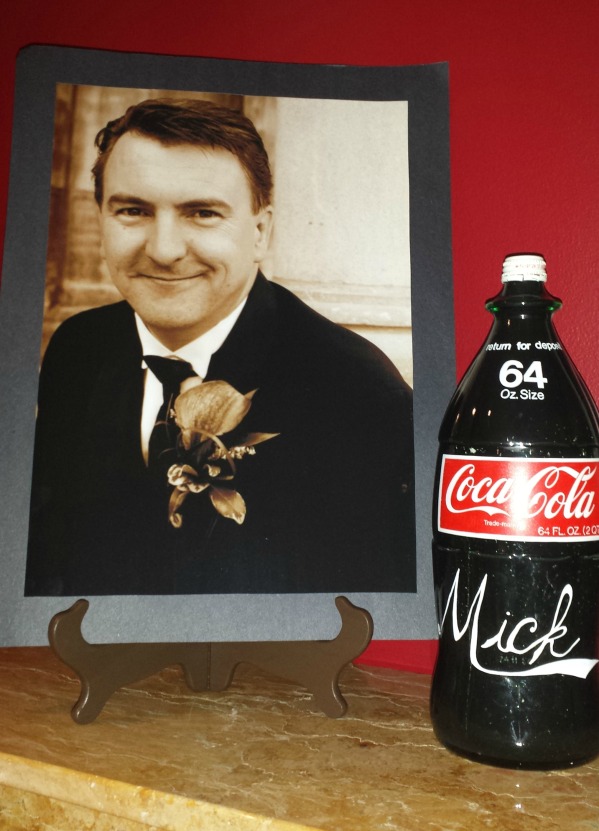 89 thoughts on “A Little Heart to Heart”