Hey there folks!  It’s been a long, LONG time since my last post and I’ve missed you all terribly.  I’ve been working long and weird hours and when I do have time off, must either recuperate with sleep or attend to other stuff.   I haven’t had time to write nor read but do promise you, a change is a-coming!  Call this the first step. 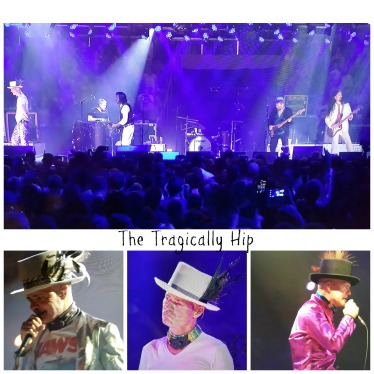 A fascinating event — nay, phenomenon — has taken over the Canadian people and I have, subconsciously, allowed myself to be swept along.  To show how strong this phenomenon is… I was never their biggest fan.  Oh, I like many of their songs.  Actually, since this whole thing has started, I realised I like a LOT of their songs!  Just never gave much thought to it.

How could this happen?  More importantly, why?  They’ve been around for thirty years, have released over 14 albums and a bunch of singles over the years, winning awards and such.  What was the big fuss all of a sudden?

It started with a most sad story.  In May of this year, the lead singer, a man a mere two months older than I am, Gord Downie, announced that he had terminal brain cancer.  A shock to fans everywhere.  Amidst cries of anguish, The Hip (as they are commonly known, counting four other members: Rob Baker, Gord Sinclair, Johnny Fay and Paul Langlois) announced they would do a farewell tour and, on top of that, released an album this past July called Man Machine Poem.  Needless to say, it is at the top of the charts.

So, tonight, August 20, 2016, is the final concert in their hometown of Kingston, Ontario.  The CBC (Canadian Broadcasting Corporation) is showing/playing the concert on all their platforms from radio to TV to on-line.  They’ve even pre-empted the Olympics for this momentous occasion!

As I was driving home from visiting family, I listened to CBC Radio 2 with Rich Terfry and his Hip pre-show.  There were snippets of interviews with various famous Canadians such as Mike Myers, Serena Ryder, Geddy Lee of Rush, etc. all saying how The Hip have been an important part of their lives.  I was surprised at how emotional I felt!

Rich presented the top ten The Tragically Hip songs as voted by listeners across Canada and I was shocked that I barely knew number 1!  It is a beautifully tragic song dedicated to David Milgaard who spent 23 years in jail for a crime he didn’t commit.

I got home at 8:30 pm – just in time for the show to start.  Even our Prime Minister was there!  How cool is he, anyway?

Needless to say, the emotions were running high and after an almost three-hour concert (including the three encores), tears were shed.

The love between these five men, friends since forever, was palpable.  Not shy to show said love in front of millions with kisses – on the lips, no less – and you know it is not just for show.  It was real.

Like our PM said, we don’t know if we are saying goodbye or celebrating Gord Downie, honouring him or just celebrating Canada.

Like The Hip or not, it was a special evening, to be sure. 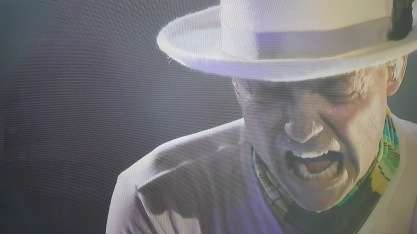 It's another snow globe kinda day...
End of the road. No way I was waking/running through that!
Dang. It it hasn't been so bright, I might have been able to see... Then frame this right in the square. Ah well...
Lying down on the job
Follow A Dalectable Life on WordPress.com
Rethinking Life