“Be mindful. Be grateful. Be positive. Be true. Be kind.”
― Roy T. Bennett, The Light in the Heart

Well now, I have not done one of these in ages.  Too long, methinks.  I miss writing more than a 100-word story for Friday Fictioneers – not that that will end any time soon!  I love it way too much to give it up.  However, I know there are one of two of you who enjoy my “Gratitude” or “Weekend Coffee Share” type posts and I kinda like doing them.  Helps to give me a perspective on what’s what in my life.  Plus, I promised myself I would write more in 2018, including continuing preparing my stories of Mick and our family to eventually turn them into a book of short stories.  Rochelle has been most convincing and I think I shall heed her noodge.

Till then, here’s a little recap of my past week.

On Tuesday, Zeke and I finally went on one of our long walks.  It has been so cold that I just couldn’t bring myself to bundle up and go out there.  We’re talking -25ºC (-13ºF) with a windchill of up to (down to?) -40ºC (-40ºF).  Nope.  I may have done it a few years ago, after Mick’s passing but since then have become such a wimp.  Wimp.  That’s a little harsh.  Let us just say I did not acclimatise my body to the redonkulous cold this year!  Tuesday it was a balmy +1ºC (34ºF)!  Come ON!  Woo hoo!  It was so warm, that I overdressed.  I was dying of heat and half the time, held my mittens in my hands and not covering them.  For a girl with Raynaud’s that is quite something…

We step out and I see my car.  Sigh.  I’ll have to take care of it later.  I had decided to park my car in front of my mother’s (oh when will it be towed away?) so that the guy could clear out my side.  What I hadn’t considered was the city passing and snowing me in.  Merde.

Zeke got most excited when we turned right at the end of the street as he knows this means a good looooong walk! 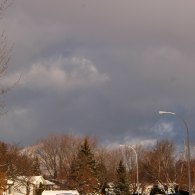 Of course, when we left the house the sun was shining brightly but not even half-way into our walk, it disappeared.  As a result, we didn’t go quite as far as I would have liked.  You see, all the pathways had not been cleared yet and man, that is a good workout!  But I did go past “my” favourite willow treet

We trudged along, resting here and there… 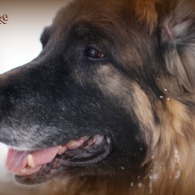 Only hints of blue

We didn’t make it all the way to the other side of Parc des Coutances, where we sometimes run into a bunch of other dogs and their mistresses.  Both Zeke and I were starting to feel enough was enough.

Of course, on our way back, the sun came out again. Hmph!

Bright amidst the grey

On Wednesday, Aidan declared we needed to go to the barbershop as he had had enough.  Holy moly! 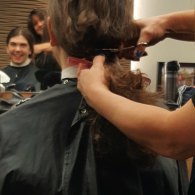 I swear he looks even taller than his 6’1″.  He’s happy, his girlfriend is happy but I think the happiest one is his brother, Iain.  Kept calling him a bum… Brothers…

Of course, everyone was so excited to get all that rain and watch our mountains of snow melt away.  And then we weren’t.  Starting Friday night and well into Saturday, we got bombarded with a ton, a TON, I tell you! Of snow.  I don’t know what the exact numbers were but my front steps disappeared!

There are steps – I swear!

It was an impressive accumulation, gusts obviously made it worse than it really was, but impressive nonetheless.  Once the snow was removed from my car, I found a nice layer of ice… sigh… why did I get rid of my Tempo last year?  Why??? 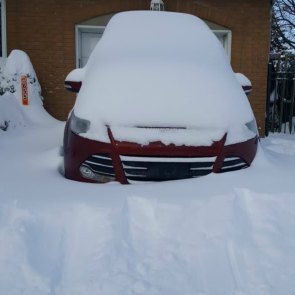 Almost as high as the shovel!

Zeke was most helpful…

And I took a break looking up at the clouds.  They were moving so fast, it was hypnotic.

By the time we finished our big job, the sky had turned a beautiful shade of gold… 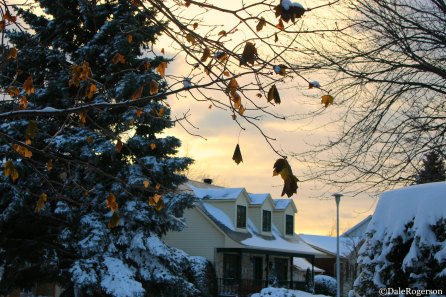 Didn’t torment any of you with pictures of food – this time – but suffice it to say that a nice pot roast was waiting for us after a job well done!