“We must find time to stop and thank the people who make a difference in our lives.”
― John F. Kennedy

Monday was a mostly lazy day, I would say.  Doing paperwork and such but not too much – almost as bad as this cat

On Tuesday, Julie and I went to see “The Shape of Water”.   We were going to walk towards a Korean restaurant we enjoy but that would have meant getting cold.  And losing the time walking.  So we decided to go up to the fourth floor of the old Forum to eat crap instead.  By crap, I mean burgers and fries and beer 😉  Man that place is tired!  Still.  It gave us a chance to catch up and enjoy a good hour and a half before the movie.  Which we stupidly didn’t buy tickets for beforehand.  Why?  We still can’t figure out why we didn’t.  After waiting in two lines – first one to get to either the wicket with a human or the machine… was me.  We were surprised that the theatre was pretty full and were happy to get decent seats once one guy moved over.  We really enjoyed this sci-fi flick.  I didn’t think I would, frankly.  I was going to include the official trailer but frankly, now that I’ve seen the movie, I find the trailer gives too much.  Just go see it.  Everyone was fantastic.

On Thursday, just as I was about to close my drapes and hit the sack, I see THIS in my driveway!

Now I know it’s a random turn-around in my driveway but still… No way someone could do that on purpose!  😀

As we were sitting on my couch Saturday, François pointed to my painting by my friend Véronikah…

Friday Zeke and I went for a walk to “my” river over at Parc des Brouages.  For some strange reason, I have been sleeping like shite lately, waking up really early – too early – and giving up on going back to bed, catching up on sleep, meanwhile hoping that by getting up early, I’ll fall asleep at night and stay asleep until morning.  Dreamer.  I’m nothing but a dreamer.

That said, and trying to look at the bright side.  I’ve been getting stuff done.  Sorta.  The good thing is we get to go out and get some frest air!  But first, before it disappears, Zeke next to my “hearts”!

And off we go, passing through the “des Iles Percées” park with its marcescent trees. 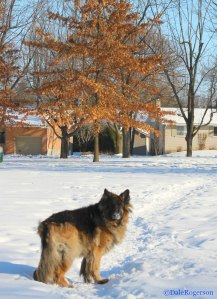 And making our way to said park.  Perfect timing.  We walked along “my” river, snapped some pics, fell on my knees on the hard ice (ouch), and walked back just as the recess bells rang.  We made sure to be out before the school kids were released!

What’s this?  We are not alone… rabbit?

Two sides of “my” river

Hearts can be found anywhere you look… 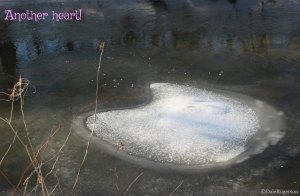 Worth the banged up knee… Zeke actually came towards me when he heard my “ouch”.  I then sat back and listened to the relaxing sounds of the water. 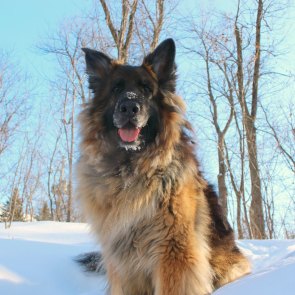 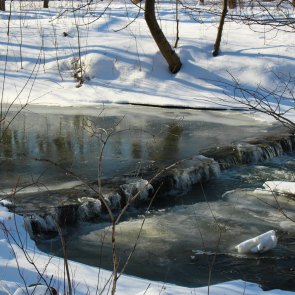 Walking back towards home, we came upon these mega Christmas balls…

And a typically Canadian thing… toboggan next to the door! 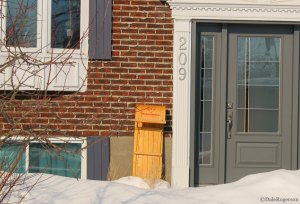 Get home and I finally pick up the glove that has been on my snow removal stick, figuring that I shall finally chuck it as no one has claimed it.  Umm. It’s mine… 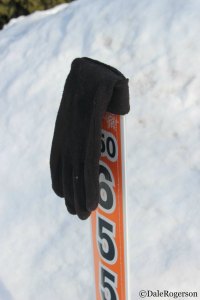 And with so much beautiful sunshine, despite the cold, the snow and ice have started to melt.  Houston, we have a problem.  The temporary fix did not last overly long!

Saturday, we were off to celebrate Dany’s birthday at La Porte Grecque. Of course I said I would make the cake!  What flavour?  Oh, chocolate-anything, was the response.  I said I knew exactly what I would make but just needed to know how many peeps we would be.  Final countdown, 15.  So, though my recipe says my 4-layer chocolate-banana cake in 8 1/2″ cake tin is for 14-16, I didn’t trust it… so I went with the 10″.

Birthday boy seemed to be quite happy…

How could I resist being the middle of these two handsome dudes, making a “sangweech” as Giselle called it!

The whole gang together to celebrate.  Just think.  All of us with arrows pointed at our heads?  Besides Dany, who arrived in the 3rd year of high school, we’ve known each other since 1976… 42 years this year!  (Well, actually, Julie and I went to kindergarten and grade 1 together!  Nuts!!

Oh yeah… The hearts were still in my driveway come Friday afternoon when François showed up.  So, upon returning from the restaurant, his answer was this:

Which, if I haven’t put you to sleep yet, brings us to Sunday!  Do nothing day.  Well, sorta.  Giselle sent me us a message thanking us for celebrating her man’s birthday and also to tease us with the fact they were having left-over cake for breakfast.   In retaliation, I made chocolate-banana pancakes and served the left-over white chocolate whipped cream (icing) on top!  This caused another flurry of exchanges… tee hee…

After stuffing himself, François slaved away painting in the basement and I did the preps for that night’s supper.  The Super Bowl and chicken parmesan – not quite a usual paring but it worked for us!

It’s now so late it is almost Tuesday!  Sheesh!!!  Have a fabulous week, my lovies…

It is a beautiful morning...
When your son says he's making supper. Just sit back and enjoy, I say. Squash ravioli with black garlic cream sauce.
While I will admit it's kinda pretty...
I love the colours of this tree.
Follow A Dalectable Life on WordPress.com
Rethinking Life