Home » Food » This, That and Whatnot – to NOT Call it a Week-end Share

“Let us be grateful to the people who make us happy; they are the charming gardeners who make our souls blossom.”
― Marcel Proust

It’s funny.  Every time I start something, it eventually falls through the cracks.   I guess it’s just the way I am.  I am blaming my Aries personality.  We are notoriously known for starting projects.  You want to get something going?  Get one of us involved.  You want to finish said project?  You better have back up because we will be off on a new project.

or is it Shiny Object Syndrome?

Either way, I am guilty.

Last week I was doing the Costco thing – you know, where you have a list, you will absolutely abide by it and somehow end up spending $200 more than planned?  Anyhoo.  I came upon the flower section and saw pussy willows!  Do you remember when you could see those all over the place?  Why don’t I see them anywhere anymore?  So, of course, when I bought them, they looked like a bunch of sticks with only one or two pussies – don’t even!  I got mocked by the men in my life.  Whatevs.  I am a happy camper.  I should have taken a “before” pic but didn’t.  So trust me.  They did look like sad sticks.  However, lookit ’em now! 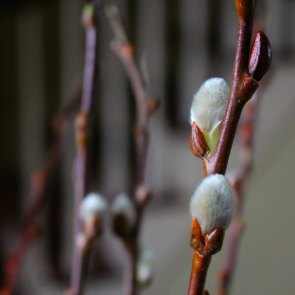 Totally unrelated and yet is.  Way back when, my mother had Nat King Cole records – you know, the vinyl kind – and on the back of the jacket of a double-album, was a lovely text about Nat and his “pussy-willow voice”.  I always thought that was the perfect description and it has stayed with me since.  Was hard to pick a favourite, but here you go.  Enjoy.

On Monday, Zeke and I went for a walk.  The sky was glorious, the sun was shining, it wasn’t “freeze-your-butt-off” cold… We made our way to “Teletubbie Park”.  We’ve been calling it that since we moved to the ‘hood and the boys went to elementary school right beside it.  Funny the things families do or create or say. 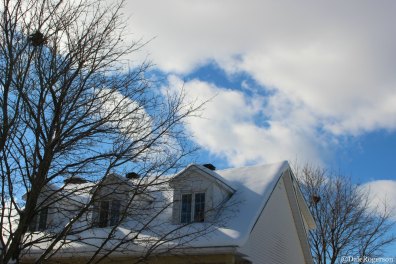 On Sunday I had made mussels – they are my “fast food” and I almost always make two flavours, which I did this time.  I then keep the left-over broth to make a soup.

Moday’s was a Thai-style shrimp and noodle 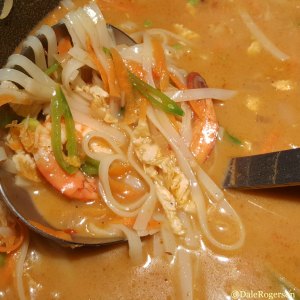 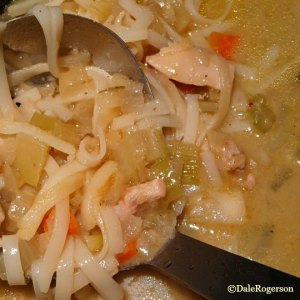 They may look similar but were world’s apart flavour-wise.  I have to admit I was quite pleased.  Firstly, the Thai one got my Pepper-head’s (Iain) approval for spiciness and the Marinière was no basic chicken noodle soup!  Will I be able to repeat it?  Probably not.

I also had taken out chicken thighs for Wednesday – “no, Aidan, I cannot make Chicken Parm every time I take out chicken!!”  But I did made a casserole thingy with my left-over Frenched string beans (yeah, I parboiled, and split them apart by hand then sautéed them with some shallots and red peppers) and left-over boiled potatoes that I sliced and used as a topping with a sprinkling of cheese.  Not overly pretty to look at and simple, yet tasty.  I was surprised by a visit from François as I don’t usually see him during the week, lately.

As Wednesday was also Valentine’s Day, I made the trek to visit my mother-in-law, bringing her a stuffed dog to cuddle, a small rose plant and some chocolate.  She loved the dog, decided to call him Harry (will see if she remembers next time I see her!)

On my way back, while stopped at a set of lights, I looked to my right and burst out laughing.  Apologies for the quality but I had no time to open the window and was being honked at!

My favourite British cussword and pretty much how I feel every time I return from a visit with Jean.

On Saturday Iain bought a car, thanks to help from Andre, Mick’s best friend.  He’s pretty pleased to have wheels again!

Iain agreed to be my date (after inviting himself) to Andre’s birthday celebration.  I was more than happy to have him take my place in the Vodka Shot Foolishness that takes place every year.  You see, it was always, Lorne, Bill, Andre and Me…. while the “girls” Dorothy, Phany, Tammy and Mick refrained.  After Mick died, I no longer had my D.D. so I would sleep over.  I have since lost the taste for vodka thanks to these over-indulgences.  I don’t care how much the bottle costs, it all tastes like rubbing alcohol to me now!  Iain, you may take over the mantle and play with the big boys in my stead!

I may not partake in the vodka shots (okay, maybe two) but I will always bring the cake. 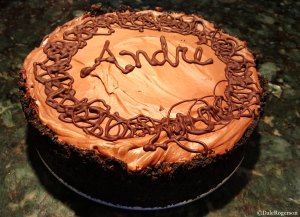 But before making said cake, I helped François collect my friend Andrea’s wood.  Ironically, after writing a Friday Fictioneer about the Emerald Ash Borer problem, she had three of her trees cut down.  Wood is wood is wood, and François’ mother heats her house with it so he was more than glad to help her get rid of it!  After it has properly dried, he’ll cut it down to size.  He figured he got a good three cords of wood out of what he took!  Talk about a savings…. going price is easily $125 per cord, if you’re lucky.

Some of the wood

Once François felt the truck could take no more, off he went back home; and I, to finish the cake, shower and, along with Iain, make it to Tammy and Andre’s for 5:30.

I’ll not embarrass my son by including a shot of him snoring on the couch and missing dessert… because that would be mean. I’ll save that for a more opportune time!  These boys – especially Lorne – are a tough crowd to keep up with.  The birthday boy himself was blinking his eyes for long periods of time at the table 😉 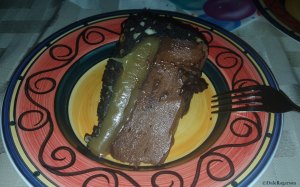 A slice, to see the inside

Sunday is supposed to be a day of rest, but there was still more wood to collect; which we did, and once François returned from delivering it and returning the truck, we each had a different left-over, vegged on the couch and watched the Olympics.  Okay.  I watched, he snoozed!

I know it’s already Tuesday, but do have a fabulous week!  Maybe this weekend I’ll manage to post on Sunday.  Who knows?  I make no promises.

A few of the 10,000 things that make me happy and grateful

21. Mick’s friends – still keeping me in their group
22. Being able to include my son in this get-together
23. Blue skies, crisp air
24. Pussy Willows – just because
25. Being the official birthday cake supplier

22 thoughts on “This, That and Whatnot – to NOT Call it a Week-end Share”