There have been times I’ve found myself in the midst of a group of people chatting, and suddenly start feeling “less-than”.  The conversation has turned to our kids.  And so starts the boasting session – as I like to call it:  My daughter graduated magna cum laude at Hoity-Toity U in blah-blah, my son was seen by a scout and now two universities are fighting over him.  My child’s work ended up in the hands of a guru of Doohicky and is now working for her.  Straight-A student. Valedictorian.  Winner of scholarship.  It becomes extremely difficult to not feel the pressure to “keep up with the Joneses” and try to show off my own kids’ exploits.  Except, there are none to mention.  What?  Do I not think my children are as good as theirs?  How can I even think that thought?  Then I feel like a total shit.  How dare I compare my kids to others?  I try not to do it with my own self and here I am doing it to them?  Not that they know this whole discourse is going on, thankfully.

After I’ve done chastising myself, I stop and think about the various good (and sometimes bad) things the boys have done so far… I know deep, sometimes DEEP down that they are good people.  They sometimes work hard, sometimes not so much.  They succeed at some things, and others, not so much.  They make me happy, they piss me off.  They do what I ask when I ask, I need to nag.  You know, like most humans/beasts borne of our loins.  We can’t always be on point all the time and can’t expect them to be either.  I know I sure as hell can’t.

So today, I am going to show off my son, Iain. (Total cheat… taken tonight instead of Saturday 😉 ) 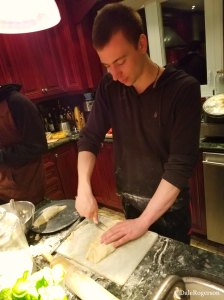 He’s a funny one, that one.  He is so like me at times, it’s scary.  Then, at other times, he is very much his father – on a lot of good points – sadly, not the neatness part.  That he gets from me.  But, with all that he’s inherited from his folks, he is also very much his own man.  He’ll spend hours watching videos, learning about a subject.  From exotic animals (knew all about the critters brought to my nephew’s birthday eons ago), to anything Bear Grylls, to guns (it must be a guy thing), to all sorts of things Russian.  Lately, he’s been alternating between watching Gordon Ramsey’s Kitchen Nightmares (hah!) and Cook with Boris.  How do I even know this?  Because sometimes he watches them while he snacks and he’ll even share by casting an episode on the TV.  Of course, once the snack is over, he just leaves me hanging.  Oh well, I’ll take each little moment as it comes.  He’s cheap in doling out “special Mom-Time…”

First he introduces me to some of his Russian – um – music on our way back from Andre’s last February.  He was sleeping in the car on our way home – felt like I was driving his dad home, back in the day – when he suddenly woke up and decided to connect his phone to my car, practically taking my hearing.

Then we have friggen vodka tasting sessions…. The boy spends a fortune on vodka.  He likes to sample all sorts.

This past Saturday, while François and I were out with co-workers, he decided to try his hand and Chebureki.  Why?  Because he watched this video.

Wow.  My kitchen. Wow.   Such a mess.  He had just finished frying his batch up and was eating his very first one when we arrived.  He shared with us.  Oh my.  Delicious!

But my kitchen. Wow.  Mess?  Doesn’t even begin to cover it.  Oy!  That said.  How proud am I of this man-child of mine who made the dough, prepared the filling, fried the chebureki…

I look at him, then at the kitchen, and back to him and he says “later” as he leaves for his room.  I decide to retire to MY room and leave him to it.  I hear banging around at 11 p.m.  Then nothing.  Hmmm.

I wake up the next morning.  Mess is still there.  I basically bust a gasket.  I bang on Iain’s door and get the response “There’s no more dish soap.”

François decides to go to the store to buy some because he sees that I am fit to be tied and he’s unhappy if I’m unhappy.  He is truly a nice guy.

When François returns from the store, Iain comes down, declaring he was going out to go “get stuff”.  I look at François and tell him that under no circumstances is he to touch the dishes.  Bloody hell.  I am NOT touching them either.  I loathe to wake up to a mess like this and I want to make us a pot of coffee.  I pile the mess into some semblance of order and leave the mess for Iain. 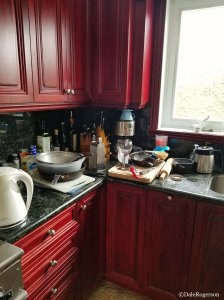 Said son returns and proceeds to clean up the kitchen.

It’s amazing how one can go from super proud and pleased to peeved beyond belief.

Art Towards a Happy Day

Pull up a chair. Let's talk.

Writing is the way.

My view, tho' somewhat askew...

Because sometimes life just makes you stop and think