I have to thank Frank, I think, for introducing me to The Piano Guys on his blog.  If it wasn’t him… no… it was him, I’m fairly certain…  I then caught a video here and there on Facebook, which led me to watching one after another on YouTube.  Well, don’tcha know, way back in February, the 8th, to be precise, tickets went on sale for The Piano Guys.  They were going to be in Montreal for three nights.  Woot!  Without further thought, I bought a pair of tickets.  For Wednesday, August 1st.  Six months away.  Had no idea who would be joining me and it didn’t matter because I knew I would find a willing accomplice.

Only thing is, not many people in my crowd know who they are.  No matter.  I mentioned it to Julie, that kinda friend who is willing to join me for pretty much anything (Cubano Sammy Search? Check!, Ballet tickets sold to me from another friend? Check!) “Who are they,” she asks?  “Google ’em,” I say.  Same day, I get an “I’m in!”  Like I was surprised.  This chick is a lot like me.  We dig good stuff.  We like to explore, we love cultural activities… we were even asked if we were sisters as we walked to the venue! 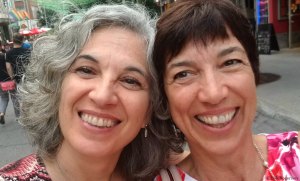 So, let’s start at the beginning of our evening.  Yes, we went to a favourite restaurant in the Gay Village:  Mozza Pâtes et Passions (where I have brought about 13-14 people so far – I’ve lost count).  It’s good food quality/price-wise, it’s bring-your-own-wine and it’s the best place to people-watch as you sit on the terrasse (terrace for you non-Quebecers) – and lemme tell you, there are some wild ones.  We smiled and nodded at the ones we could not help but admire…. coz seriously, that scrawny guy in the floppy hat, yellow dress, fishnet stockings and platform sandals, not walking but sashaying in a way that said… “This is me, bitch!” deserved a smile.

Plus, where else can you dance in the bathroom?  (Yes, I am sitting on the toilet, looking up!!)

We decided to take a chance (dissing the weatherman’s predictions) and walk to Place des Arts from Mozza – we are talking a good 20 blocks, 1.7 km (a bit over a mile).  Now that is not so bad, a twenty minute walk or so, and part of it in the middle of St.Catherine Street which is closed off to cars during the summer and strung up with balls representing the LGBT flag. Fun stuff.

We made it, with time to spare, and sat in our front-row tickets on the first balcony, right in the centre.

What a show, with each half lasting one hour, a 20-minute intermission separating them.  Time flew.  These guys are hilarious, ridiculously talented and wonderful performers who who interact with their audience as well as each other.

So, why are they called The Piano Guys when there is a pianist and a cellist?  Oh, and two other guys who are officially part of the group, so to speak?  Well, it’s like this, see.  It was all part of a social media strategy… Paul Anderson had a piano store called, you guessed it The Piano Guys.  Jon Schmidt (the pianist of the group) came into the store to practice piano when he was in town.  Paul asked Jon if he could film him and upload it to YouTube to share on Facebook and such to sell his pianos.  Jon agreed.  However, Paul saw a video Jon had uploaded of him and Steven Sharp Nelson (the cellist of the group), doing one of their mash-ups they are so famous for, which had received more than one million hits.  He asked the two guys if they would allow him to make professional videos of them, which would be uploaded to YouTube and the store’s Facebook page, all to promote his store.  Paul then brought in his neighbour, Al van der Beek (singer and music arranger) into the fold.   They chose the craziest locations, places one would never expect to find a piano, to sell his pianos.  Not a single piano was sold.

A phenomenon was born.   They blend classical and contemporary music which they put together as a “Mash-up”, i.e. The Mission’s Gabriel’s Oboe with How Great Thou Art – so beautiful.  They did, thankfully, play this one while the video played in the background.  Gorgeous.

They don’t limit themselves to this mix of genres.  They do straight-up classical or straight-up jazz, as well.  Jon played a beautiful solo piece he wrote when he was 17, called “Waterfalls”.  Hard to believe he was 17 when he wrote it.  Then Steven played his famous “The Cello” piece, as he calls it, by Bach, that he does for 8 cellos.  I was wondering how he would manage to pull this one off as he cannot be on 8 different cellos at the same time in a live performance! He showed us with all his accessories.  I must apologise for my video.  I was trying not to disturb others, so I had my hands covering the screen and was trying to place the phone between the bars.  Not quite so successful but voilà.

They played, they teased each other, they told their story.  Then they brought out the two others.  Al has quite a nice voice and he sang, “Okay”, getting the audience to sing along.

This is the type of concert where you half expect a rather sober experience.  Or a slightly “stiff” one.  So not the case!  Julie said she thinks she laughed more with these two guys then at the “Just For Laughs” shows she went to!

You do not expect four grown men to run around a piano, plucking the strings, banging the cover against the back, three sets of hands on the keys, slapping the sides like a percussion instrument and such.  I kinda wish I had taped it for you to see.. 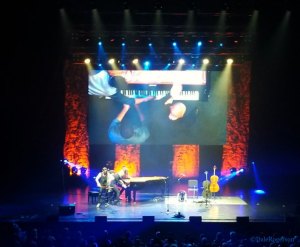 They brought in four local bagpipers to play “Fight Song”

Did one last “run around the piano piece” and took a final bow. 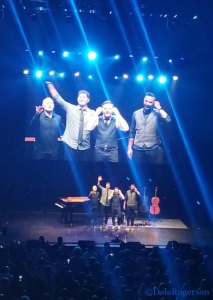 We were just so happy to have had the chance to see these wonderful performers and I highly recommend that you go if they come to your neck of the woods.  It was an unforgettable experience.

Still talking about the show, we stepped outside of  PdA, into the rain.  Remember, we have twenty blocks or so to walk.  Like two kids, instead of fifty-something broads, we gleefully just started walking, chatting away, laughing at those running – dudes! don’t bother!  We got totally soaked.  It was such a warm rain we didn’t care.  A red light, a bus hut, a quick selfie and we laughed the rest of our way to our cars.  A perfect night with a wonderful friend.  Thanks, Jules!  So glad you are my partner in culture and that Michael doesn’t mind me taking you away from him now and again!

48 thoughts on “Fun Night With The Piano Guys”