I headed south, not north; was not running away from anything but towards; not planning to never return but stay for a few days… yet I still love this song and it resonates with me, so there.

Woodstock last July was a wonderful getaway so we decided to have another. Where to meet this time? Brooklyn became the number one choice and so it was booked. There were things on our list to do:  cross Brooklyn Bridge by foot, see Bohemian Rhapsody, eat authentic New York pizza pie, go out for a nice meal.  However, we didn’t have a firm schedule. Go with the flow is how we roll…

As I mentioned to David Kanigan, a little nod to his style (my favourites of his posts) is how I’m gonna go about this…

I set my car GPS to my destination AND my phone one too.  Because the one that comes with the car is a programme and not necessarily up to date – I know this cos I’ve taken Autoroute 30 West and when I hit the “new” part the highway, the GPS freaks out and thinks I’m in space…

As a result, I was amused when the two “argued” over which route to take, and I sided with the phone.  All good, the car one would recalculate. It kept trying to get me to change and I kept saying:  “Yo, give it up Car”.  Then I woke up. Shit!  I’ve driven to New York twice now and I had never taken this road… I dunno how but I had the “avoid tolls” button checked on the phone.  “Sonova…..” Taconic State Parkway is a lovely scenic route.  No use in being angry with myself at this point.  So I enjoyed the fact that the trees were still mighty colourful compared to back home and at my next gas stop, I texted my partner in crime to tell him I’d be later than planned… 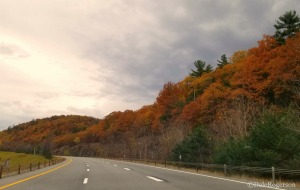 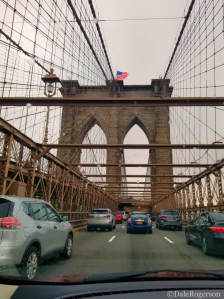 (Shhhh I pointed and shot, hoping I’d catch something decent…was watching where I was going, not what I was shooting…)

We could not have access to our Airbnb until 5 pm instead of 3 (seriously??) so we looked for a place to have a late lunch.  Well, not true.  We didn’t look.  Said partner had had loads of time to scope out the area and we ended up in some nameless joint for forgettable chicken empañadas and shared a sorta Cuban sandwich we didn’t order.  No matter!  Groceries, parking, schlepping and settling in and a joint effort towards nachos, salsa and brewskies were on the menu.

A late breakfast of coffee, bagels and frittata we made our way to the subway.  Before leaving, we did Google Map how to get there.  Problem is, neither of us is familiar with the subway system and while we consider ourselves relatively intelligent peeps, could not figure out exactly where to go.  So we asked a teller at the station.  Thought we got it straight.   Hopped onto the R train and realised we were going the wrong way!  Buddy could have told us to go on the other side to take it, no? Got off, hopped over to the other side and then continued on.  Then got off at the stop we were told to.  Could not see any connection to the A train.  Back to a teller who told us to go back on R, do two more stops and hop onto the A train and get off after three stops.  Sheesh.  Good thing we can laugh at ourselves… I was thinking, what would DK write? 🙂 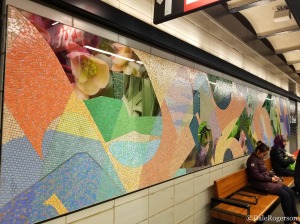 Of course, they had called for rain.  But no matter.  We were going anyway. There is something about fall colours popping when the skies are grey. 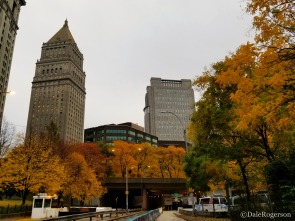 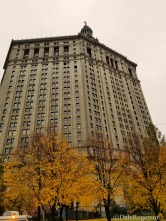 No clue what building this is

There is something special about this bridge.  You see it in pictures, in countless movies and TV shows but it was still a thrill to walk it.  And I think I’ll do it again and again!  I must admit I fell in love with the Manhattan Bridge as well and am promising myself that on my next visit to New York, I shall try to get better pictures of both bridges! 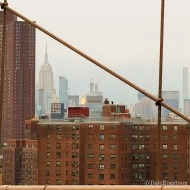 Lady Liberty through the Zoom

It was later than we thought so we skipped the movie and opted for a small pie at Grimaldi’s Under the Brooklyn Bridge.  It was a short walk away and boy was it worth it!  We decided to get a small plain pie as we were planning on my chicken parm for dinner.  It was rather late.  Don’t ask me why… I forgot to take a picture of the pizza!!  The waiter delivered it and – in heavy Brooklyn accent, please, said:  “Sorry, I made a mistake and you got a large instead…”  We forced ourselves NOT to eat the last two slices.  But we coulda… easily.

Another look at Manhattan Bridge

Leftovers packed away and most generously given to me, we made our way to the subway and back “home” like a couple of pros who knew where they were going!

A Date with Freddie and a Steak in Coney Island

Wednesday brought beautiful blue skies and warmer weather.  So, of course, we decided to go to an afternoon viewing of Bohemian Rhapsody!  A shortish drive brought us to Cobble Hill Theater to enjoy this fabulous movie.  It doesn’t matter that timelines were played with and certain events were fudged.  Rami Malek inhabited Freddie Mercury’s spirit and a shy bravado that no one else could have mastered.  Everyone has been talking about Rami looking so much like Freddie…. Did anyone not notice how Gwilym Lee is the spitting image of Brian May?  Holy smokes…  (Roger Talyor, played by Ben Hardy and John Deacon, played by Joseph Mazzello were no slouches, either…)

Dinner was a most delicious steak on Coney Island at the lovely Atlas Steakhouse.

Time to go – But First, A Walk

All good things must come to an end and we had to leave the Airbnb by noon.  After a good breakfast using up all the leftovers we had, we packed up our cars and went for one last walk.  Down 52nd Street to 1st and then right towards about 40th, give or take (I wanna say direction North but frankly, my sense of direction there was zero).   We were hoping to find access to the water’s edge for some nice pics of Manhattan.  A bunch of warehouses of all sorts and no access.  We did go down towards the “Bush Terminal Piers Park” (have no clue what they do) and was able to take these pics. 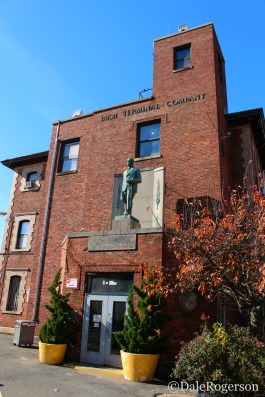 View of the City 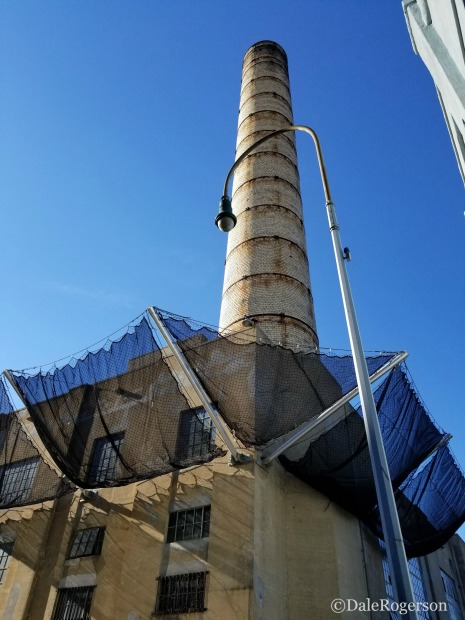 We turned around and walked past 52nd towards 58th and discovered the Sunset Park/Brooklyn Army Terminal Pier.  Score!

Statue of Liberty seems so close 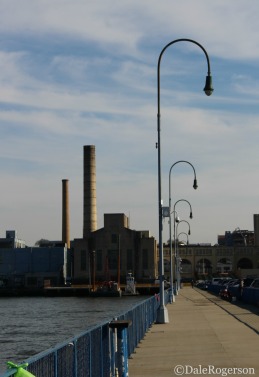 Walking back to our cars, I had to snap a couple of streets.  I love the look of Brooklyn.  It actually has a similar feel to our Plateau Mont Royal area with the staircases.  Not the same as ours go up to second and third floors but still. 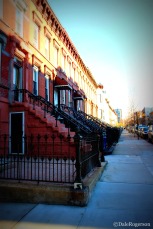 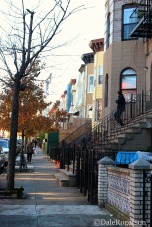 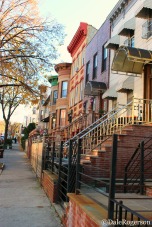 Driving on I-87 North – Homeward Bound

Now it was truly time to say good-bye and wish each other a safe trip home.  Set that GPS for home and oh my GAWD… It took me one and a half hours to get from 52nd street to and over the Brooklyn Bridge, to and over the George Washington Bridge! 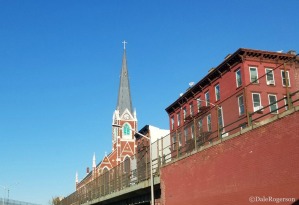 However, as soon as I hit the I-97 North, it was relatively smooth sailing.  Must say New Yorkers like to drive fast – and I have zero problems setting my cruise control to 130 km/hr (80 mph) to keep up!

Things were going great till I hit that dead zone in the Adirondacks where no radio stations come in.  Reminder again that my iPad was left on my bed!  Aaargh.  It’s 7:00 pm and I’ve got one station that is scratchy.  I press search and the numbers go all the way ’round.  Ain’t nothing coming in.  Turn off the radio.  Try again fifteen minutes later.  Same thing.  Try periodically.  Get some gospel station.  I ain’t that desperate.   Try again.  Talk, talk, talk, Trump, talk.  Ugh.  I’m not old enough to be into that stuff.  Try again.  Get some talk radio where a son and his mother are talking to the host, about the process of being transgender and how everyone deals with it.  Nope.

Signs for Whiteface Mountain but construction.  Ugh.  Down to 50 mph.  Good grief!  Spot a motorcycle ahead of me.  It’s 6 degrees Celsius! (43ºF)  The guy is wearing army-style pants, boots and a jacket.  His face is red from the cold as he has nothing protecting it and is holding the bike with one hand while the other is tucked into himself… I feel for the poor bugger.  I imagine he is riding a motorcycle at this time of the year because he has no other option.  Or he’s an idiot.

Sign says Montreal 98 miles.  Woot!  Try the radio again and I get Delilah!  Oh my goodness!   She is still on the air?  Not listening to her but now have options.  Get to the border around 8 pm-ish, sail on through and am home by 9. 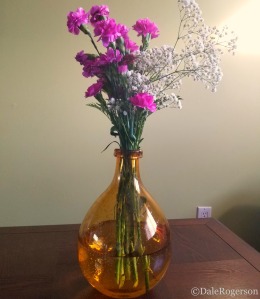 53 thoughts on “Brooklyn, Brooklyn, Take Me In”

Art Towards a Happy Day

Pull up a chair. Let's talk.

House of Heart
Thru Violet's Lentz

My view, tho' somewhat askew...