Home » Family » And So This is Christmas….

We have hit that “quiet time” in our yearly festivities.  It lasts a few hours and most members of our families try to take this time to nap to prepare for the last of the family shenanigans, or in my case, write a blog post.  After all, I managed to write 24 days in a row, why break it on this most special of days?  Besides, no matter how tired I am, I am afraid if I do nap, tonight’s sleep will be slow in coming.  And now I am feeling nostalgic.

Time moves forward; we can’t stop it.  Families grow, decline, grow again.  Children are born, grandparents (and parents) pass away, children grow up, fall in love, boyfriends and girlfriends come in and out of the picture; before long, those children are getting married (or hooking up), having children and the cycle continues.

Some things are lost along the way.  Things like the music.  As the older folk start dying off, so do their songs.  The next generation remembers some of the tunes completely, or parts of the lyrics of others and we sing what we know, faking the rest, then repeat the same verses.  We are now at the point where there are so few left from the singing generation and the songs have all but been silenced.  I still want to sing!  Rare are the occasions now where we do.  I am aggrieved by that.  My generation still has the memories of those family gatherings but the ones following us, don’t.  Is it our fault?  I don’t think so.  Times change.

Back when, before most of us had kids, we would assemble at my grandmother’s for New Year’s and spoons would come out and, if one of the old uncles was around, there’d be a fiddle, plus there was always at least one guitar… but didn’t matter if there was nary an instrument.  Because suddenly either Mémère or Matante Lucette would start the song and we’d all join in.

New traditions needed to be created when my parents divorced. Now we had to adapt to the new reality and spread ourselves to please everyone.  The Saturday before Christmas, Dad would make his bird and have us all over for his celebration, then Christmas Eve, over to my sister, Tracy’s, for a major party with both sides of the families.  Ugh… when I think of those smoke-filled rooms…  Next day, after each of us did our individual family thing, we’d schlep our stuff up north to Mom’s for Christmas dinner and a sleep-over.  Some years we’d make it to Mémère’s for New Years but that meant two two-hour drives up north within a week.  That quickly became old.

Traditions changed once again and, for the past, shoot, I don’t know how many years, our formula has remained the same.  Up until Dad’s death in 2013, we did the Saturday before Christmas at his place, then the Christmas Eve at Tracy’s – no more smoke and much more reasonable by being immediate families only – which still implies 25 people or more!

Mick started a tradition of making Christmas brunch for family and friends – I can’t even remember when it started!  It was like a rotating door:  some would arrive, stay awhile, eat, chat, leave and more would come in.  This, too, changed over the years and became smaller with mostly family with a few friends who pop over.  After Mick died in 2014, Iain took up the mantle.  So very cool to watch him do what needs to be done to keep this tradition going.  And he won’t admit it but he is so proud to do so.

Then supper at Lisa’s for the classic turkey dinner.

We interrupt this post because the internet decided to go wonky on me and I had to leave for turkey dinner at my sister, Lisa’s.  So much for posting for a 25th day in a row!  It is now very early December 26th…

Differences were set aside to embrace the spirit of the season.  Food was shared, drinks flowed, laughter was heard.  Three gatherings in the three sisters’ houses with the same core people in two days and we wouldn’t change a thing.  Well, except I would have liked to have won at Texas Hold ‘Em but at least didn’t lose my money!

Our new traditions having been holding strong and we’re enjoying them, knowing that there will be changes in the future as that is the nature of life.  New people shall arrive, others shall leave and so it goes.

I still wish we would sing, though. 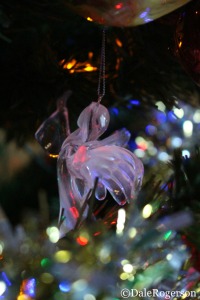 My all-time, never to be excluded Christmas song is Mahalia Jackson’s “Silent Night”.  Thank you Dad, for bringing her into my life.