Home » Writing » Morning and the Sun is Just Rising

I am awakened earlier than I want to.  It’s 6:45.  Zeke waited until Iain left for work to need to go out.  I get up, go downstairs and let him out.  On my way up, I see Aidan is awake, say good morning. I get a mumbled “good morning” back.  Excellent.  I return to my still warm bed, tuck and roll and snuggle.  And wait for sleep to come. But one ear is open, listening.  Will Aidan let Zeke back in?  I look at the time.  It is 7:10.  No such luck.  He gets up, dresses and leaves the house as he has an 8:00 class and will probably be late.  He doesn’t even grab a banana-chocolate muffin, made just last night.  There is no way I will be able to fall asleep now and on cue, less than fifteen minutes later,  Zeke is scratching at the door.  I take that as my sign to get up, open the curtains and start my day.

Plug in the kettle, measure out my coffee for my one-cup Melitta and turn on the computer.  Get a joke from Tracy who is back at work after a three-week African trip with her daughter.  She asks what the hell I am doing up so early when I don’t have to.  I fill her in on my crappy night:  asleep by 11:30, awakened at 1:30 by, who knows what, still not sleeping by 2 so I take a little aid and am back asleep by 2:30-ish and then the rest.  To which I get a sympathetic “Ugh. Sleep is overrated” response.  Smiling, I take my now-ready coffee into my office and check my emails, respond to comments, read blog posts while observing the goings on outside. 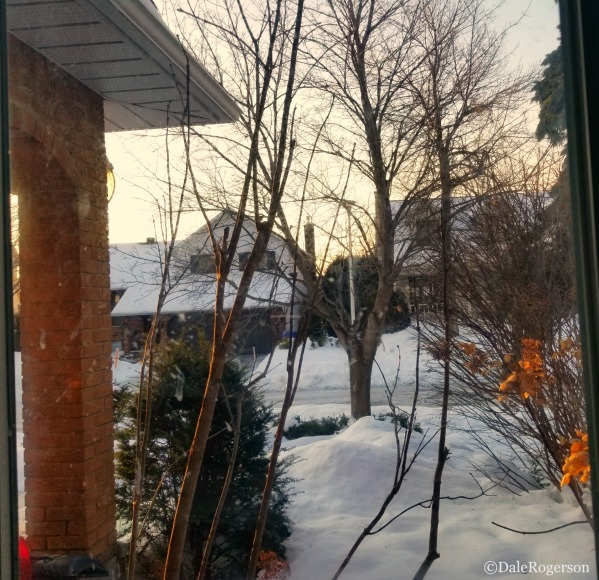 I can understand Mick’s joy at sitting at this same desk every morning.  He loved watching the neighbours getting ready to leave for work, or running for the bus, walking their dogs.  It was one-thousand fold better than his office in our old house, which was in the basement, a small window above his head, facing the backyard but under the balcony.  In an attempt to get more light, he ripped out the trellis that had been installed to keep out critters.  It was a depressing place to work for sure, and one of the main reasons we moved.  That, and my request that he build a second bathroom.  That was it!  The For Sale sign went up.  He was done with the renovations! 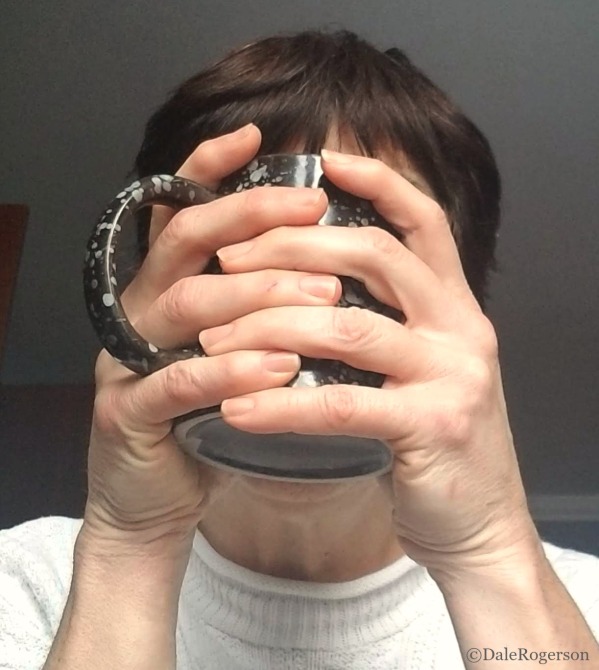 Hands wrapped around my cup for warmth, I watched my neighbours across the street.  The garage door was open and I could see the Toyota SUV was parked inside (so hubby took public transport to work).  The Audi was parked outside and running to warm it up and I watched the young daughter get into it.  Meanwhile her brother remained outside throwing snow chunks into the street.  Mom shuffled her way gingerly to the open garage door to collect salt to spread around.  Yesterday’s rain has made all of our walkways, driveways and streets dangerous ice rinks.  And not the smooth sort, either.  The previous dump of snow left bumps and ridges and ankle-breaking crevasses.  She sprinkles the salt in the necessary places and slip-slid her way back to her son.  Breaking off chunks of snow with her boot, she supplied him with more “snowballs” to throw.  She then grabbed him in a big hug, planting a kiss on the top of his head.  So sweet.

Just then the school “bus” (Dodge Grand Caravan) arrived and, with another hug, mom let him climb in, chit chatted with the driver a minute or so and, as soon as the minivan left, got into her car to drive the daughter to her school.  I now wonder why both kids are in different schools when they are so close in elementary school age… Inquiring minds want to know.  Our neighbourly relationship goes no further than:  “Hello, how’s it going?” so I’ll never know…

87 thoughts on “Morning and the Sun is Just Rising”