Home » Friends » Celebrating a Friend, Dancing with Leonard and Random Act of Kindness

This thing we have has been going on for a few years now.  I’m still in awe at how life’s cards get shuffled and played.  Julie has made a regular appearance on this here blog and today I feel like adding just how much I appreciate our friendship.  It’s funny.  We went to high school together but were never in the same class (she, with the brainiacs; me, with the troublemakers), didn’t do sports together or hang out together but were friendly without being friends per se.  A few years ago, I found out we were in the same kindergarten class!  Not that either of us remembers the other from then.

We had high school reunions and saw each other at those but I feel it was especially after the 150th anniversary of our school (September 11, 2005) that we really started to connect.  She, at the age of 40, had recently become a widow with two young boys, ages 2 and 3. Her story was so tragic.  Her husband was hit by a car in downtown Montreal.  It’s ironic to say now, but I couldn’t imagine what she was going through, then. 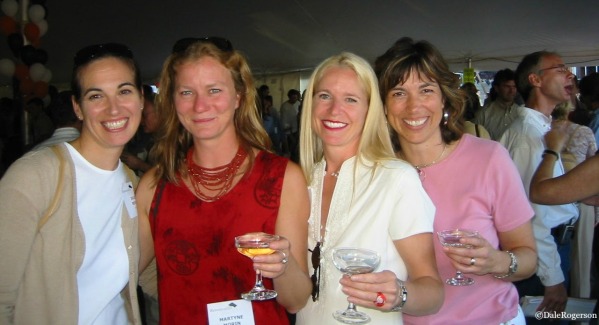 Julie and Martyne, Liette and me

After this particular get-together, we met for lunch and realised we had a lot in common.  Vive Facebook for keeping us connected.

I was shocked when she showed up at Mick’s funeral because we still weren’t where we are today.  But, having been through what I was going through, she felt compelled to come.  I can still see her walking towards me with her beautiful, warm smile and remember it taking me a few extra seconds to register who she was.  That whole unexpected/out-of-context thing.  From this point on, things changed.  We now had another thing in common. In the past couple of years we have become more than just “cultural chicks”.  (I think we just use those events as excuses to get-together because often times, the best part of our afternoon or evening is the connection we have by sharing stuff.)

Speaking of which.  This time Julie is the one who snagged a couple of tix for a show without knowing who would accompany her (yeah, right!)  Those tickets were for Les Ballets Jazz de Montréal (BJM), Dance Me, music of Leonard Cohen.  After holding on to those tickets for one year, the night finally arrived.  We met upstairs from where I was supposed to park.  How in-synch are we?  Neither had her coat.  We both assumed we would eat at one of the restaurants in Complexe Desjardins (where I parked), which we did.  One of the many great things about Montreal is the possibility of making our way underground from one venue to another.  After a shared plate of calamari, our salads of ahi tuna and a glass of wine, we made our way back to Place des Arts.  What fantastic seats we had!  Row F, seats 1 and 2. 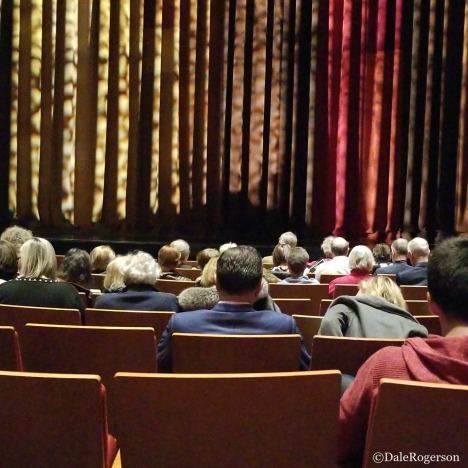 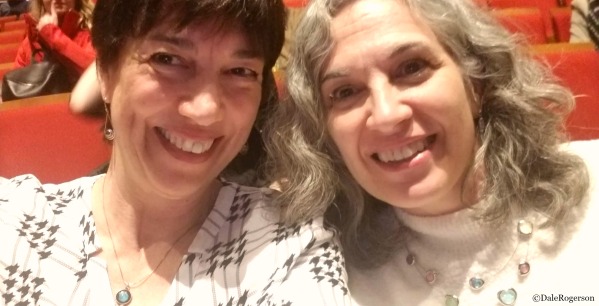 What. A. Show.  Especially since the last three ballets we saw were less than stellar.   BJM gets criticized for having no soul or emotion while being very energetic and athletic.  I beg to differ.  Obviously, the music was sublime.  The costumes were sobre, pantsuits in blacks and greys, long beige shirts and one in a burgundy dress.  Discussions were had with Leonard himself when the dance company secured the rights to use his songs and he requested they keep his personal life out of things and just focus on the music.  I think they did so brilliantly.  As in most dance creations, there are always little parts that make me wonder where the hell they got that idea from but that in the end, I care not because it is breathtaking to watch.

“Dance Me to the End of Love” had particularly frenetic movements that worked well.

At one point, one of the cast members sat on her knees, a guitarist stood behind her and she sang the sweetest rendition of “So Long Marianne”, not a dancer in sight.  So beautiful.

“Lover, Lover, Lover” was rather humourous.  One male dancing with one after another woman until he falls in exhaustion.  His fellow men come and help him as he regains his strength.

And what can I say of “Suzanne”?  It was sultry and evocative.  I was totaly entranced and was surprised to find myself with tears in my eyes.  I was a good girl and filmed nothing so all I can do is show you a snippet…   Just know that once he picked her up, her feet did not touch the ground until the end of the song.  Insane.

The did not only use Cohen’s older music.  They used three songs from his last album “You want it Darker” including “Steer Your Way” and “String Reprise Treaty” as well as the title song.

Of course they did Hallelujah… This time sung by a male singer, with the same woman offering her sweet soprano for the Hallelujas…and the dancers slowly appeared.  Just sublime.

The set, the lighting effects, the dancers, the music.  Brilliant.  Honestly, one hour and twenty minutes of non-stop bliss.  For this show, we never doubted we got our money’s worth.   It has been playing for a couple of years now, touring all over, and if it comes to your neck of the woods, I would not hesitate to recommend it.

We made our way to the exits, still wrapped in the music and the movement, the chatter around us adding to the buzz. Julie insisted we must make a pitt stop.  We made our ways to the ladies’, sure the line-up would be atrocious, but it turned out not too bad.  And suddenly I got the most intense burn that went from my back to my chest, up to my throat.  This was a whole ‘nother level of heartburn.  Julie could see in my face that all was not well and concern immediately transformed her face.  “Are you okay?”

“Holy shit this is painful,” I grimace.  “Why, oh, why do I not carry ‘Tums’ in my purse?”  I am taking deep breaths, hoping the pain will subside but it is not working.  I scare the shit out of Julie when I say, “You know, women are more likely to feel major heartburn when they are having a heart attack.”  Of course I don’t really think I’m having a heart attack but… I bend over in pain then stand upright, trying in vain to will this agony away.

The lady in front of us in the line-up turned to me and said “I do.  I have some.”  She took a bottle out out of her purse and tapped out two tablets into my hand and then a grey capsule also came out. “Take this as well.  It is charcoal.”  And I know, from my grandmother’s preference for treathing anything naturally, that this is not a bad thing to take.

My gratitude to this generous stranger cannot be suitably expressed.  I gratefully accept her gift, dry-swallowing the charcoal capsule then crunching the two tablets and continue breathing.  By the time a stall liberates for me, I am feeling better.  The pain subsides ever more as Jules and I make our way to the exits.

In the lobby, there is a sculpture that fascinates me every time I go to this particular hall.  I cannot believe I had not photographed it before.  And what did I do this time?  Yes, I did.  BUT, I forgot to get the name of the artist and no amount of Googling at this late hour is helping.  I guess I’ll just have to return and get that info.

We went our separate ways and once settled into my car found that I felt pretty normal.  Got home and shortly thereafter received a text:  “Are you feeling any better Cara? You had me worried there.”

I responded that I had me worried there!

Got another text checking up on me this morning.

76 thoughts on “Celebrating a Friend, Dancing with Leonard and Random Act of Kindness”