Home » Friends » For Patrick – One Last Cheers My Friend!

During my break at work last Sunday – Canada Day (July 1st), I was catching up on my emails, reading comments, etc. when I saw I had a LinkedIn message from Hugh. My heart dropped before even opening it. An awful feeling came over me and I had good reason. His message announced that his husband, Patrick, had passed away the previous Wednesday, five days after turning 56. His message said that “a routine surgery that went wrong in every possible way, and Pat fought like hell. I hope somewhere Pat is greeted by Mick saying ” Hey Buddy!!!”

I have been struggling with what to write since then. A flurry of emotions has come up and memories have been flooding my brain and heart since. Instead of sending plain old condolences to Hugh, I thought I would celebrate the times we had together.

He was an oncology nurse when we first met and eventually moved to palliative care. When asked what he did for a living, he would reply “I kill people.” What he meant was, he helped patients go gently into the next phase. When a nurse loses his first patient, he is given an angel pin. This pin he gave to me for Austin…and it is still pinned on my jean jacket.

We met in April 1997. After losing our son, Austin, Mick’s boss sent us off on a holiday to get away from it all and try to regroup from our loss. We had no idea where to go so we went to a travel agent who suggested a cruise. Something that had never occured to us and we jumped on it. We flew to tthe Dominican Republic, settled into our cabin, explored our itty-bitty ship (trust me, it was puny – 60,000 ton, 900 peeps on board and I’m not sure how many staff). Come supper time, we found our assigned table. And there they were, Patrick, Richard, Loretta, Hugh, John, Fred, Wilma (I’m not joking) and their daughter and us. We surveyed our dinner partners for the next week and figured out right quick that Pat and Hugh were a couple even if they had a couple betwixt them. A couple who happened to be Patrick’s sister and brother-in-law. A friendly bunch, we decided.

Our first stop was Puerto Rico and The Boys, as they would forever be known to us, said that, as this was their second week, they had already done the visiting thing and to enjoy ourselves. Which we did.

Day 2 found us in Sint Maarten and who do we run into but Pat and Hugh. A buck a beer from the lady under the palm tree and we were suddenly fast friends. Mick was going crazy, needing to pee out his beer and we all laughed at him. Why do you think we keep going into the water? After his initial reel of disgust, he joined in. After all, where do the sharks, whales, fishes, etc. do their business?

Just warming the water together…

Then we hung out in St. Lucia with Bruce, one of the dancers on the ship – by now, we were hanging out at the “Gay Bar” in the evenings (it was not really one, but we called it that) where music played outside and there was a dance area at the back of the boat.)

Barbados. Oh dear. We went on the booze cruise on the Harbour Master, which is the friendly competitor to the Jolly Roger (one we would take on our second cruise with the boys). The sailed us to this cove where there was one big cloud hovering. The rest of the sky was blue with white fluffy clouds but not for us! After swinging from ropes whilst getting more and more drunk, the rains came. All the participants hovered under awnings. Not us. Mick got them to play music loud and the three of us (Mick became photographer) started to dance. The Macarena was the IN song of the time. Before we knew it, the rest of the passengers realised what fun we were having and joined in. 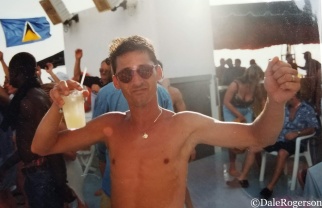 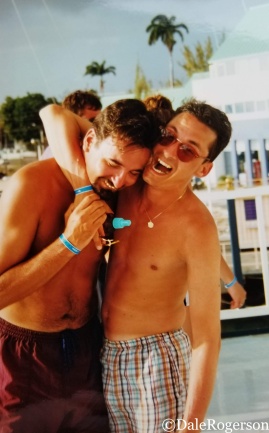 Feelin’ no pain and a favourite picture of theirs, and mine

By St. Thomas, Mick tells Pat. “Man, my bar bill is insane.” To which Pat replies: “I have two words for you, Honey… Duty Free.” In those days, you could buy booze and bring it on board and just request juice or soda to go with. I’m going to say it cost us less but I’d be lying. 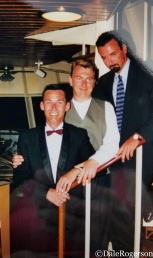 The cruise over, addresses and phone numbers were exchanged and promises to get together really soon were made.

They live(d) in London, Ontario, a good seven-hour drive, which we were all willing to make. They came over in July of that year and lemme tell you… the recycling bin was embarrassing… 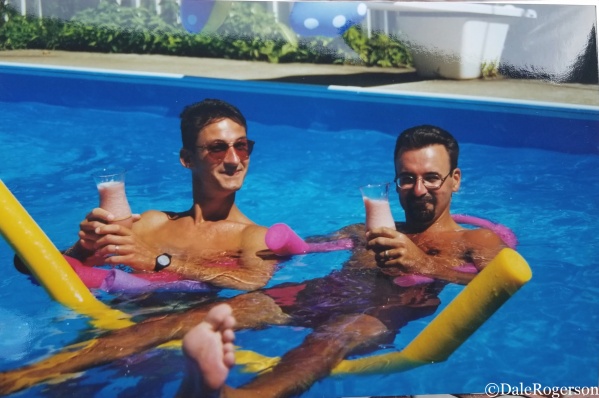 Pool noodling it with beverage in hand

Labour Day weekend, they rented a cottage somewhere in Algonquin Park and we went to join them. We got waylayed by the “wolf howl” – I kid you not. You cannot drive through until this is done. People line up for miles every Thursday in August to call the wolves and have them respond. We had no cell phones in those days so the Boys were worried, needless to say. I was about two months’ pregnant and quite anxious to get to a restroom and no – I was not going into the woods, thank you very much!

We spent a wonderful weekend. Richard and Loretta also came by. Then, while sitting out by the bonfire with the radio playing, the news came on. It was four in the morning. Princess Diana had been in an accident. Patrick was devastated. We were all in shock. We kept hearing the reports, hoping she had not succumbed but, as we know, she did.

Sitting on the porch

The following summer we got together back and forth at each other’s houses again. Their place. 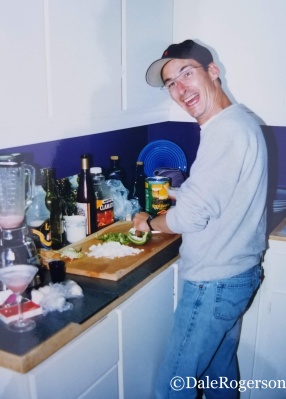 Then our place. Lisa and Chris joined in and let us just say, Chris will no longer drink “Banditos” (a pre-mixed bottle of tequila and Kahlua).

Sampling my products from Corby

We found out the Bolero (our original cruise) was still running and decided to go with them on our second cruise, this time with their friend Patricia (a co-worker nurse of Pat’s. They were known as Boy Pat and Girl Pat ;-). While waiting in line to board, who did we see registering patrons but Bruce! We started yelling “Bruuuuuce!” till he looked up and responded with an “Oh my God!!!”. Needless to say, we were going to have a great time!

We did take another booze cruise, this time on the Jolly Roger…

Maybe we should try something else…

And visited different islands such as St. Bart’s and Virgin Gorda (where our new friend Ellie and I almost drowned and got battered by the rocks.) 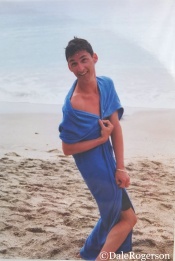 More visits back and forth after this cruise (where I think I got pregnant for Aidan!) 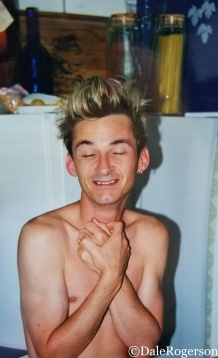 Corby party at my house and they were there

Gay marriage had not been legalized yet so the boys decided to have a Committment Ceremony to celebrate their love for each other. Mick was Patrick’s best man and I was official cake maker and photographer. They had their beautiful ceremony in their back yard on August 28, 1999. Aidan was born October 26. Can you say I was very pregnant? They never even got to taste the cake because they could not find their plates, so the heathens (guests) just started breaking off pieces. By the time they returned with plates, the cake was gone! I worked hard on that sucker!

Me and the boys and my cake 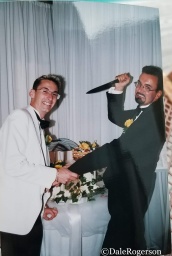 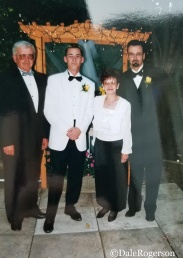 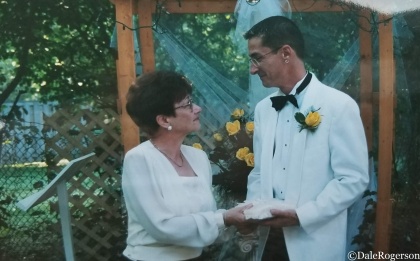 A sister who was also a mother to Patrick

We went on one more trip together, this time to Costa Rica. We went on a bus tour where the driver passed out from a diabetic episode. Thankfully, the bus was not in motion yet when this all happened as we could have ended up part of headline: “Bus Crashes Over Cliff, All Dead, Twelve Canadians On Board!”

We went zip-lining in the fantastic Monkey Jungle Canope Tour in Guanacaste. Pat was NOT impressed. Terrified of heights, he did it anyway! But when it was over, demanded a cigarette and a beer! After, we went and took a volcanic mud bath.

Something happened during that trip and Pat and Mick had a fight. We’ll never understand the whys of it and even though they made up, the phone calls became fewer and the visists stopped.

I was having none of it and went to visit them one last time by myself.

I called every once and again and we spoke for hours each time, catching up on stuff. Without focusing on anything negative, I was very displeased they did not get invited to our wedding in 2002… I am certain they were hurt by this as much as I was. I’ll put it into the Shit Happens File and leave it at that. Hugh agrees. It doesn’t matter anymore anyway, does it?

I’ll forever be grateful for the friendship we had with these two fabulous people. Hugh and I have vowed to get together soon and I know we will. When the pain of losing his spouse eases somewhat. When the sharpness dulls a tad. We will reminisce some more (We’ve already clocked a couple hours.) We have already laughed but I think we will also cry.

I kept this photo for last. I love the happiness on Patrick’s face after all the stress (and trust me, he was sta-ressed!) was over, the vows spoken, the food eaten, the guests still celebrating…

You were a character, a generous man, a drama queen, a friend, a brother, a husband. You will be sorely missed.

You introduced me to Holly Cole Trio so I feel it fitting I share one of our favourites.

118 thoughts on “For Patrick – One Last Cheers My Friend!”