You, my readers, know by now how much I love to go see plays and ballets and musicals, et al, alone, if need be, or preferably, with friends.  Julie has become my “go-to cultural buddy” through chance and happenstance.  Giselle heard about our little outings and wanted in so, from now on, when I see something I want to go to, out goes the invite to both ladies.  When I heard about “Come From Away”, there was no way in hell I was missing it. So… we went last Thursday. All three of us!

Underground parking makes our lives easier because we can leave our coats in the car (right, GiGi?) and wander through the Complexe Desjardins, grab a bite to eat, then go through a tunnel to the Place des Arts venue.  At this time of the year, the Complexe does a beauty of a job in decorating. There is always the Christmas train that bring the little ones for a tour.

The fountain gets all prettied up and spurts to music and Santa awaits behind a bedazzled maze, 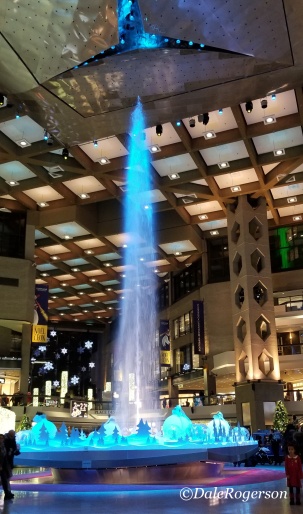 Aiming for the ceiling

There was a hockey game that night as well as various shows going on in PdA so the Baton Rouge restaurant was full. We were told it would only be about 30 minutes so we had time to sip on a Bloody Caesar while we waited.  We shared an appetizer of delicious, perfectly cooked calamari and then each took a tuna power bowl (poke bowl) which was ridiculously delicious. 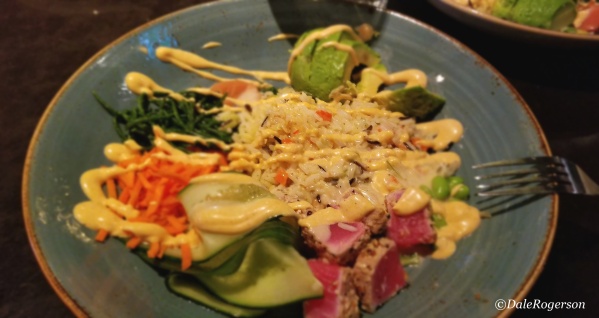 Then it was off to Place des Arts, the lare Wilfried-Laurier theatre where our seats were up in the balcony (nosebleeders, though first row).

My friend Cathy also got tickets to take her mom but was further down the row. (We had hoped they could be closer!) So, I stole her picture from FB 😉  You don’t mind, do you, Cathy?

Not only did I get a chance to say hello, Cathy brought me a gift from her trip down (up?) to Newfoundland this past summer! A ‘Come From Away’ chocolate bar.  C’mon! It was delicious…

The show was amazing. Just a quick synopsis:  This is the story of the 38 planes, with a total of 7,000 passengers, who landed in the tiny town of Gander, NF (population 9,000) following the 9/11 attacks. These are all true stories used to build this musical. It was funny, sad, touching, and joyful.  And don’t we all know what we were doing when we heard?

Here is a video of the performance of the opening song at the Olivier Awards.  I’ve included it so you can enjoy the fabulous Newfie accent as well a quick intro to how this all came to being. By the way, you’re a Come From Away when you are from somewhere else 😉

And just a little something, something. At the end, the musicians stayed behind and played this little jig..

We left the theatre with huge smiles on our faces, returning to Complexe Desjardins just as a light show was going on…

What a great evening.  We need to do it again soon.

89 thoughts on “Girls Night Out”