Five years. Five. Years. A blink of an eye, really. Time goes way too fast.  Not a single day goes by without some thought of you – sometimes with a smile, sometimes with a curse. Can you blame me?  We had a good thing going when you went and screwed things up.  No worries, though, I’m not mad at you. You definitely did not plan on leaving so soon, no matter that you said you would not live to be an old man. I’m fairly certain you meant older than 51.

You are still and will always be sorely missed by all the family and your closest friends. I get messages now and again from Paul.  And I can always count on Leonard to change his Facebook profile pic to the one of you and him. He changes it on the 11th of December and by Christmas changes it back. He has been doing it for five years now.  He calls or texts me every other week.  I also hear from John now and again. Other than that, your friends have all but disappeared.  I admit it’s a bummer to not have Armen pop by once in a blue moon but that’s life. Nothing you can do about that.

Outside of that, your spirit shows up no matter the gathering – if there are others there who knew you, there you are.  So many stories. I even wrote a poem a couple of months ago that I composed while driving home from Tracy and Sébas’ oyster party.  I have to give you credit, Mick. You have been my muse more than a few times and I suspect we’re not done in that department. 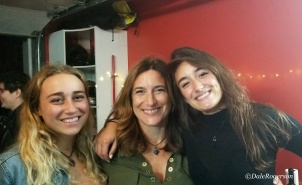 Tracy and her girls. Yes, that is your goddaughter on the right! 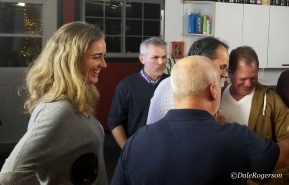 Iain is on his last six months for his DEP in electricity. The kid is frankly crazy. He didn’t quit his job at Moderco so he works from 6:45 to 2:00, then comes home for a bite and a smoke (yeah, I’m not too pleased with that) and off to school from 3:00 to 9:00. He’s been doing this five days per week for one and half years. Plus, they still love him over at Barbu so when he has no school or on Saturdays, he goes to work there.  He is on a mission. He plans on moving out come June/July so he works hard.  Doesn’t do much around the house to help, mind you, except make a mess when he cooks – he’s always trying some new recipe and he’s really good. When I get mad at his lack of participation in the household duties, he then gets all gung-ho and starts a bunch of things but sadly takes after his mother instead of his father so he doesn’t necessarily finish them (see side gate, plank on deck, electrical socket… sigh.) He’s a thrill-seeker who got his license to leap from planes with a parachute and this summer he even went bungee jumping. A wild card that one. Oh, and before I forget, you’d be rather pleased to know that Andre gets him to work for him in exchange for any mechanic work on Iain’s car.  He and Bill say that the little bugger is a good worker.  Would be nice if he was as valiant at home.

Aidan quit Dawson when he found his dream job as a video game tester. I was not surprised by his decision. Can you imagine being paid to play video games? Still, I like to hope he will do like I did moons ago when I decided to go back and finish my college degree at night. We shall see.  He had a lovely girlfriend but with her studying in Ottawa and her father dying of cancer, it was too much so they decided to split up.  A sad day for all.  But he has a great circle of friends – who are here quite often… He, too, needs a swift kick in the butt to help out an has moments where he does so on his own and then… nothing.  In the meantime, your baby is going through some serious stuff that I cannot help but wonder how you would have handled. Truth be told, I so wish you were here with me now to help me deal. But you’re not. So I have to keep being strong and supportive and hope his path leads him to what he wants but mostly, I just want him to be happy.

I worked for my fourth (and final) season at the golf club. I was bar tender/waitress this year which was most interesting.  While I had a lot of fun, it is still a job that is rather hard on the body and frankly, the pay ain’t all that fabulous, being a private club with its members that we see day after day after day.  I told them I wasn’t going back but I know they still have hopes – it’s rather nice to be wanted but, no thanks.  So, come January, I’ll be on the job search. It sucks considering I haven’t applied for a job since 1995!  All jobs since then have come to me.  Time to spit and polish the ole resumé.

I still like to take walks with Zeke, camera in hand, snapping away. He’s getting old our puppy.  Can you believe he is ten?  I have to be careful and not take too long walks with him because his hips are starting to feel it.  I had his teeth cleaned so finally, his breath is not knock-you-out gross! I am not looking forward to that day in the future when he goes to join you… Hopefully not for a good many years!

I finally sold the house.  Yep. Sold it but there was an open house already scheduled, so we held it.  The morning of, I go into the basement and there is a lake in the former laundry room.  Bloody hell.  Mopped it up, held the open house, declared it to the buyer and then took care of it.  Thank God for my cousin, Marc. Whatever work that needed being done, Marc came in and did them. I still owe him a very fancy supper.

I am still having a helluva time with the buyer. He has given me formal notice for, get this, noises in the pipes!  You know the ones that we hear whenever someone takes a hot shower? I didn’t declare it – coz frankly, I didn’t think of it and why would I declare something I don’t even hear anymore? I swear, if I could have ripped up his offer, I would have. I had another offer from a guy who just wanted to flip it. Too bad I had accepted the first one. This buyer has caused me and my real estate agent headaches like you could not imagine. And the worst part is, I know you would have done whatever he wanted and have been done with it. But I’m not you and I don’t have your level of good in me. So now I’m paying for my pigheadedness.

As for the house I bought – I am suffering buyer’s remorse, big time. It’s around the corner from the old one. You know the one, It was sold like two or three times in the past ten years. 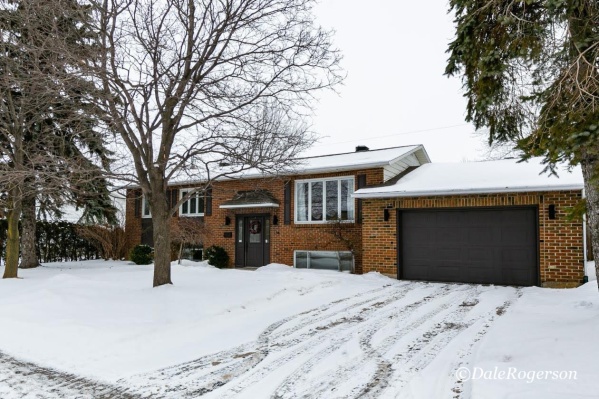 There are things I didn’t see when I visited it and maybe my real estate agent wasn’t as on the ball as he could have been.  Neither here nor there. I bought the damn thing and I hate it.  Hate is a big word.  I dislike it. A lot.  I’ve been here since June 1st and still haven’t fully moved in. Of course, I left that big-ass house with all that space and have downsized as per my desire but oy. So. Much. Shit. And a lot of it is YOURS.  Working in a golf club means working all summer and weird hours so I just didn’t have time to hold a garage sale or try to get rid of shit before moving so it all came with us. And filled the garage and my room and the basement.  I am still tripping over boxes.  No way in hell we’d be in this boat if you were here.  Course, if you were still here, we wouldn’t have had to move, either.  So there you have it. I’m done whining. Just had to get it out of my system.

Christmas is in a few days, we’ll squeeze the family in here for our annual breakfast – how we are going to make it in this itty-bitty kitchen is still a mystery. I know this is odd for me but I have had zero desire to entertain in this house, thus far.

Come January, I am putting myself to work purging and doing what I didn’t have time to do before. Maybe once I’ve placed stuff, and put on a coat of paint, I’ll see the potential I must’ve seen when I decided to buy it. Learn to love it.  Silver lining: I do love the garage though. Parking my car inside has been the one thing that I have been truly happy about, so there’s that.

Your mom is slipping away so fast. She barely eats and is getting beyond thin.  She never recognizes me first thing when I arrive until I remind her who I am and then she asks me how you are doing and why aren’t you visiting with me.   It’s hard to have to tell her that you are busy working because it serves no purpose to tell her the truth. She’ll cry, be really upset and in ten minutes, ask me how you are again.

On July 1st, Hugh contacted me to tell me he lost Patrick. He died five days after his 56th birthday. A sad state of affairs. What irony that a nurse should die of a hospital error. I have since spoken to Hugh a few times and he’s having a rough go of it, which is to be expected.  Lemme tell you, you have quite the party going on up there with too many of our friends, yanno?

The boys and I are joining my sisters, their husbands, some of their kids and my mom on a cruise March 1st. I can’t tell you how much I need this.  Life was way different with you around. Summer vacations plus somewhere hot in the winter… man. Adjustments.

That guy I dated didn’t pan out.  I was done after six months. But hey, all good. I’m not looking to becoming half of a couple.  I am learning to be my own woman and just don’t feel like giving up my own power.  You held a large portion of it in the twenty years we were together and I’m getting used to not having to cede to another.  Doesn’t mean I don’t still wish you were here but just know that I’m doing all right.

You’ll never not be a part of my life.

Exploring the Past to Improve the Future