Home » Writing » Dude, Where is My Air? Times Two

I could nor would I ever call myself a runner.  Oh, back in high school I did the 100-metre dash and was good enough to win first prize, once Rachel Dalpé left for another school after Secondary 3 (Grade 9).  The 200-metre was too long for me.  So to run, as in jog? Nope.  Dunno that I’ll ever experience the “runner’s high” I read about.

Way back when I did karate, we had to run around the dojo for what seemed like hours (probably longest was ten minutes) and sometimes we trained outside where we ran in a park.  Lord, take me now…

So, what am I doing trying to run now? Can’t explain other than to try and fulfill my doc’s recommendation that I up my cardio for at least fifteen minutes per day.  Well… that was one year ago and I’ve nothing to report.  My long walks with Zeke are a good thing but not something to give the ole heart a workout.  And now, the old guy is slowing down and our walks have become meanders so I felt I had to start doing something.  Plus, let’s face it… since March I have been cooking up a storm and don’t want the results to land in my posterior, thighs, belly… There needs to be some balance!  I am NOT gonna become one of those memes that are all over the Internets…

I started slow. Real slow. While walking Zeke, I would “jog” mostly in place, because I didn’t want to force Zeke to run, for one minute, walk for two… run for two, walk for two and a half – all counting my time in my head.  When we got to a park, I’d take his leash off and run around him while he sniffed around, sometimes trotting beside me, other times standing there looking at me like I was some sort of freak.  I was happy to see my knees held out, feeling no pain that night nor the next day

I found an interval app for my phone and set it for 5 intervals: 2 minutes of running, 2.5 minutes of walking.  Still, with Zeke on leash, I used my running mostly in place and was pleased with myself.

I am not pushing my luck so I run only every other day.  The last time I brought Zeke with me I did my five intervals, which have by now been changed to 2/2.  Felt energetic and added another 2 intervals.  Hmm… walked for a bit and thought, why not do another three to make it a total of ten? And I did.

Good gawd… that was quite a preamble for what I wanted to say and the reason for my title!!

On Tuesday, I decided to leave Zeke behind and see what I could achieve.  Plus, the weather was warm enough for me to wear leggings that stop at my knees (reminding me that, while I’ve no one to show off my legs to, warm times equal shorts and skirts and feeling the wind through my hair should be limited to my head) and a simple long-sleeved sports shirt. I kept things at two minutes run, two minutes walk because I knew that running “for realz” would not be the same thing as I’d been doing.  So I set my app for 10 X 2/2 and off I went. The first five intervals went reasonably well even as I cursed the need for two sports bras to keep the girls in check and not bounce willy-nilly.  Ladies with small boobs, be happy.  I could barely breathe from the pressure but I was pleased.  By interval six, I felt a small cramp in my side.  I pressed my hand against it and slowed my pace, breathing deeply (well, trying to) and made it to my walk time.  Just as I sort of caught my breath it was time for number seven.  It started off rocky but then all was good. By interval eight, I got a call from my mother-in-law’s social worker advising me that she (Jean) was being put on Covid-19 alert and would be tested.  Fuck.  I told them to keep me posted and resumed my run, trying not to think about her because there is not a blessed thing I can do about it.  The last two intervals were not easy but I made it.  When I got home, Zeke was waiting for me so I couldn’t refuse him, could I?  Off we went for a decent walk which I also dubbed the cool-down.

I was surprisingly still energetic and passed the vacuum all over the main floor, adding to my work-out! The boys did their share by mopping and vacuuming the basement. All was good.

Yesterday I woke up to rain. Dammit. I’m on a mission to go every other day so I knew this was not going to be fun.  I waited for a bit and it abated enough for me to be willing to go out.  The wind, though. Man, do I understand why you don’t like to run in the wind, B.  I walked briskly for a few minutes and then started my “programme”.  Yes, it is still 10 X 2/2.  The skies were kind and stopped dropping rain but it was rather chilly.  The wind was in my face and after about thirty seconds into my first interval I was thinking, nope… this is not gonna work.  I was thisclose to upchucking.  Gave myself a peptalk until the buzzer for walk started. Gawd almighty… what am I doing? Second was no better but I managed.  Halfway through the third one I had convinced myself that it was okay if I only managed to do six in total. Give myself a chance, yanno?

By then I’m near “my” willow tree and the wind was no longer in my face so I think bullshit.  I run back and forth along the gravel road to and from it for two more intervals.  I tell ya. When one is determined, one does what one must. 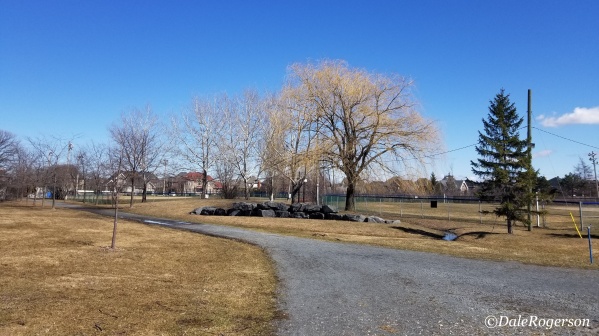 Pretend this was taken on a cloudy day…

As I head back towards home, I find myself watching the clock, telling myself to go, go, go. Don’t give up.  By the time I reach interval 9, I realise that I hadn’t checked the clock this time, nor the last. Wooot!  I’m no longer feeling the cold either…

I get home just as I finish.  Open the door, grab the leash, Zeke comes out all joyous and my buzzer goes off. What? Dammit.  One more to do.  However, as I have Zeke, it’s that little jog in place that I must do.

And I ain’t complaining one bit.

Follow A Dalectable Life on WordPress.com
ABOUT EVERYTHING AND NOTHING
walkingoffthechessboard