Do you remember when we called cancer the C-word?  The pandammit changed all that so that the new C-word is Covid or Corona or Calvaire (French swear word for misery) and goddammit-all-to-hell-we’re-fed-up-of-being-locked-up-and-not-being-able-to-see-friends Crap.

That said, while I have avoided whining about it or blogging about it, I’ve made mention in passing and since we are starting to see a sort of glow at the end of the tunnel… I don’t dare say more for fear of potentially jinxing anything – right. Like I have any kind of power of that sort!  Still. Why take unnecessary chances?

This past Thursday was our St-Jean-Baptiste holiday in Quebec.  I, for one, can become quite Québécoise by indulging in the old tunes I very much enjoyed do when I was a teenager (and still).  My eldest asked if he could have friends over on the Wednesday, as everyone was off on Thursday. Always such a cool mom, I said yes 😉

The evening was perfect and the kids all ended up on our roof to watch not one, not two, but four different fireworks. 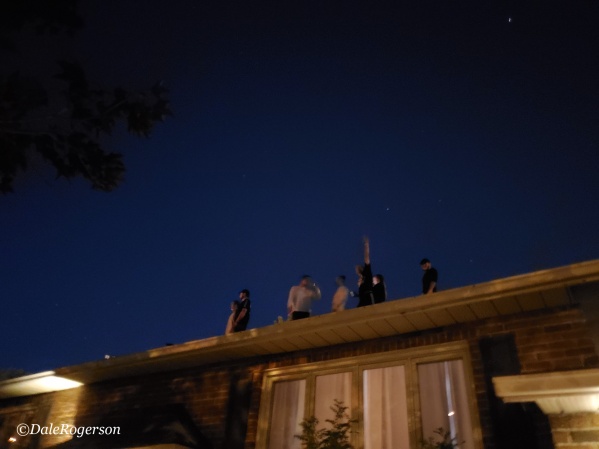 After taking this picture of the “kids”, I simply turned towards the street, walked to the curb and was able to film this:

On Thursday, officially the holiday, I was invited for an afternoon pool party with four of my high school friends and their spouses – yeah, yeah, odd man out seems to be my thing.  I made Thai Shrimp Salad Rolls and individual strawberry Pavlovas. 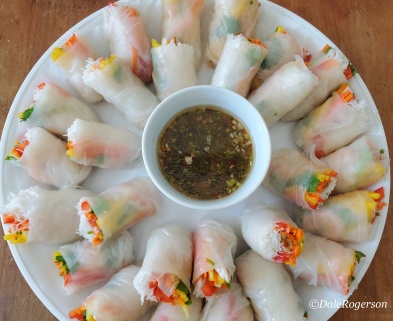 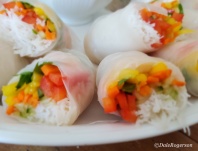 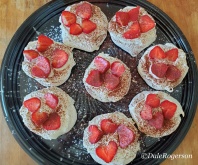 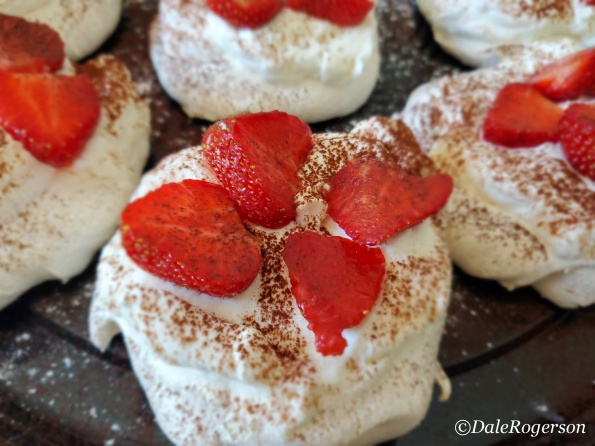 Thankfully, Dany took a group pic so I am actually part of the gang! To think we’ve known each other for 40+ years!  So much to talk about and never a dull moment betwixt the gang.
Michel J. is a sailor and spends his winters with his wife, Corinne, sailing (mostly) the Bahamian waters.  This lead to a discussion, once again, of us potentially renting a large catamaran for a couple of weeks next year.  Our other friend, Martin, is also a captain so it might turn into two smaller boats for the lot, rather than one big-ass one.  It’s the second time we talk about it, so ya never know, it just might happen one day! 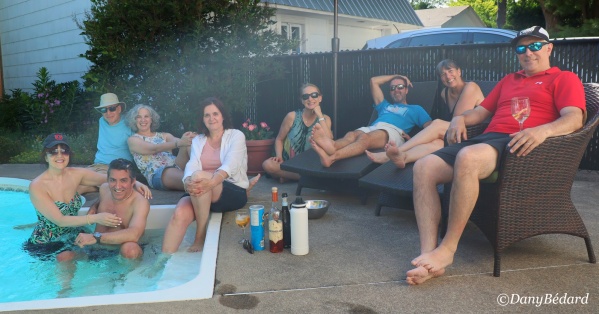 What was supposed to be a late lunch, turned into a lunch and supper thing so come eight p.m. we were all ready to go to our homes to watch the Canadiens beat the Vikings 😉 Go Habs Go!
On Friday I had a lunch with Michèle at our favourite Louise XIV restaurant in St-Bruno.  We hadn’t seen each other in over two years so it was a given we’d go there and it was a given that we’d end up having one of their delicious tartares and it was a given that it would take us hours to catch up. Got there at 12:30 and left at 4!  And that’s only because she had to leave to get her second shot! We’ve promised each other not to wait that long again.  Too busy catching up to take pics! 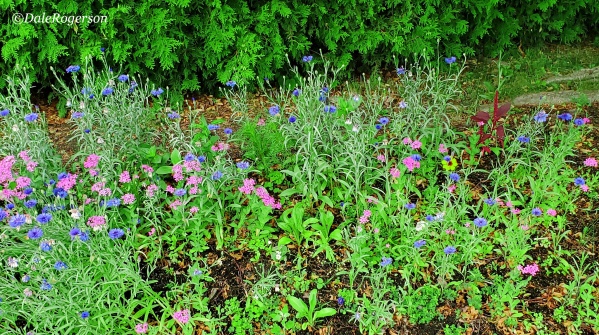 Random wildflower photo to separate stuff from other stuff 😉

Something wonderful has happened.  I predicted back when Mick died that I would slowly lose touch with his friends.  We’ve managed to keep a little bit in touch with a phone call or a text, but let’s face it, C-word hasn’t helped matters.  That said, Iain has kept closer contact with Andre – of course, it helps that he had a car that needed Andre’s expertise and Andre isn’t shy to get Iain to go over and help for whatever project he is on.  Of course, this past year, opportunities for anything have been negligible.
So, imagine my surprise when on Wednesday, Iain announced that Tammy and Andre were coming over for supper on Saturday! To my comment of:  “Jeez, nice of you to check with me to make sure I’m available…”  what did I get as a response?  Lemme tell you! He said:  “Well, you have no life so for sure you’re available!”  Well. Shit. I did remind him that times have been difficult and we’ve only just been able to go out to restaurants and such and all my friends are in couples so what the hell did he want me to do? And besides, I had a get-together on Thursday and another lunch on Friday and how is that for no life?  He had the grace to say nothing more.
He invited, so he made most of the meal.  I offered to make the entrée (appetizer) – a cream of carrot with bacon.  He made these ridiculous rich, cheesy scalloped-style potatoes and his beef Wellington.  I roasted some asparagus with radishes as a side. The portions of wellington were ginormous that we couldn’t even fathom how we’d be able to eat dessert… 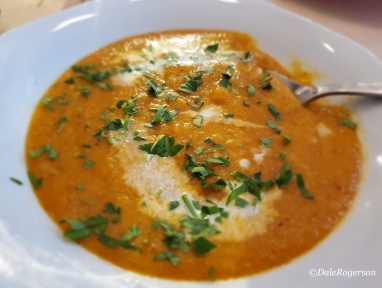 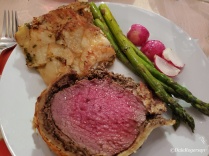 Only one way to make room for another course.  Trou Normand! 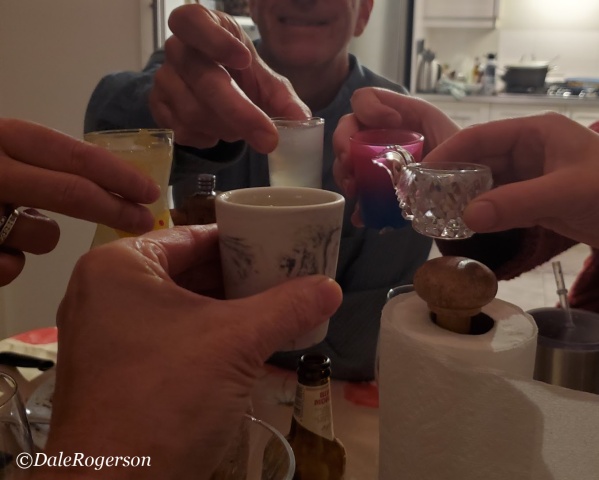 While the tradition calls for Calvados, Iain was gifted a bottle of KHOR vodka and, mixed with a bit of the grapefruit San Pellegrino, made for a delicious shot to make some space for the delicious coffee crème brûlée and cappuccino (I know, I know you purists out there, cappuccino is for breakfast. But we don’t care. We like it any time!) 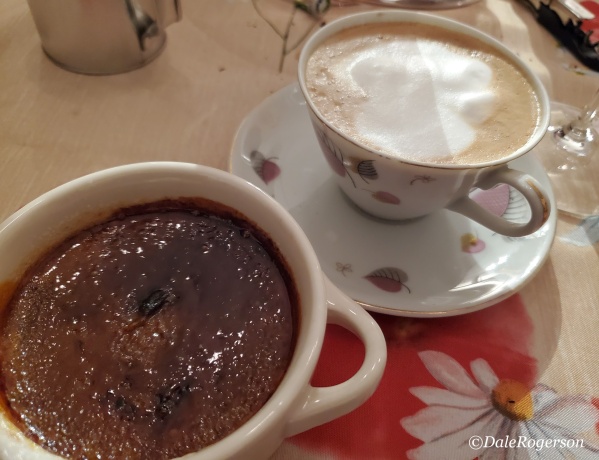 Talk about all or nothing, eh?  Three special get-togethers in three days.  My heart is happy and my belly full (maybe too much so) but it sure did feel good to gather and reconnect face-to-face.