I’ve been behind in participating in Anarette’s Elvepedia and I feel terrible about it.  I had promised her that I would keep a look-out for any Elvish happenings up here in the Great White North.  So far I have not done that; I have allowed myself to get side-tracked by the daily brou-ha-ha that is life.

You see, while I was out with Zeke (who, by the way has totally NOT been helping in me in my quest like I thought he would) I was dumbfounded to see that there had definitely been some happenings in my own yard!  Somehow, the Elves decided to go on a road trip of sorts, far from the usual fairy tale woods.  The distance between my home and these said woods is the equivalent of the quest in The Hobbit.  As explained in the Elvepedia, the North American elves are much smaller and to travel such distance must have been as harrowing if not worse.  No, up here they need not fear dwarves or hobbits or even goblins in this part of the world; but the various breeds of dogs and cats are a whole other matter!

And yet, as I was stepping away from my front door, I could see one of my tulips was just not right.  One side was down, as if used as a doorway!  None of the others were affected in this matter.  I went in for closer inspection and, once I saw the insides, I just knew.  The elves had been here.  There were all the fixings of settling in, a prepared fire pit to cook, some kind of soft material to use as beds.  I was flabbergasted.  I could not believe that, not only had they chosen to stop at my house, they did so, right in the front where anyone could have seen them!  Talk about hiding in plain sight! 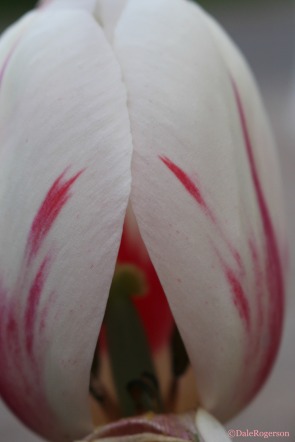 Signs of settling in

I don’t know if they felt safe here ~ I sincerely hope they know they have a friend in me ~ or whether it was just one stop on an even longer journey.  Sadly I cannot ask them as they had already left for their next destination.  I hope they were able to find other “safe houses” along the way…

I will ensure to keep you posted on any future sightings.  I promise you that I shall be more diligent in sharing my findings in the future.

They are calling for a most dreary week, weather-wise. Rain every day for the full week.  On the plus side, all that brown grass will be brought to life and transformed into lovely shades of green.  (One can always look at the bright side!)  April showers and all that….

Soooo, instead of going to the gym first thing, Zeke and I discussed it and decided it would be best to go for the walk before it started to rain!

I swear, it felt more like Fall than Spring!  Ran into a gentleman that we know through Iain’s grass-mowing days and I filled him in on the Winter’s Happenings.  He was saddened and worried for his former “employee”.  Bummer for Zeke is we ended up talking longer than he would have liked and the walk turned into a turn around the larger block!  Oh well…

We did manage to see the little budding flowers (no way I can compete with those of you in Ireland, Portland, England, etc.) and, though the light was not the best, I did get a few pics in.

Except for the red branch and the violets, all were taken in my front yard.  The little white flowers just popped up.  Have no clue what they are and, though I spent some time on the Internet trying to identify them, I did not succeed!

Have a most marvellous day, all!

There may still be little mounds of snow ~ but only in places where it was piled to clear out parking lots.  The rest is GONE!  Woot!  We’ve been hitting temps in the double-digits – positive double digits.  It’s amazing to see the difference in attitudes.  Oh, I almost always get a “bonjour” in return to my “bonjour” but now it is almost always accompanied by a big smile.  And even though we don’t want to talk about the weather, it had been such a painfully cold and miserable winter that we cannot help but rejoice that spring has finally sprung!

In two different walks, Zeke and I came upon a few flowers making their appearance…

There were spaces to run around

Oh?  There is water under my feet?  Really?

We then went to our river, the hidden part, and enjoyed the shadows and played “Hide and Seek”

You can’t see me

I’m just having a drink of water!

If I run around, crazy-like, I’ll dry off!

Spring is to be enjoyed…even if it means extra vacuuming for me!